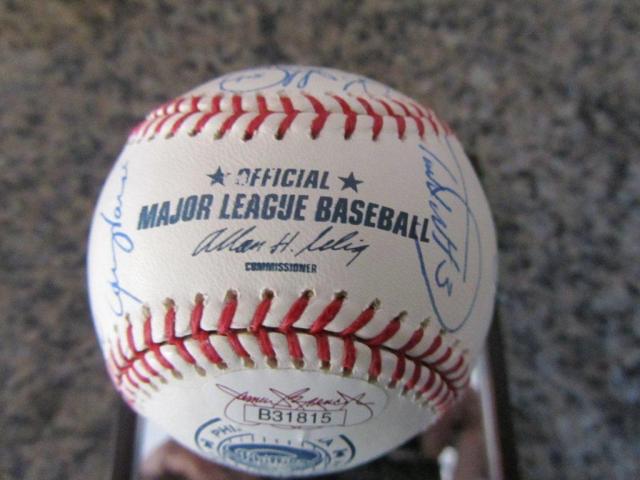 The Philadelphia Phillies played their final season in Veterans Stadium (the Vet) in 2003, and a collection of special logo balls commemorating that year were created for Phillies fans. This is one of those special collectible baseballs signed by members of that ’03 Phillies team. There are a lot of grat autographs on this ball. Signatures on this ball include those of Larry Bowa, Rheal Commier, Turk Wendel, Pat Burrel, Bobby Abreu, Kevin Millwood, Brandon Duckworth, Tyler Houston, Mike Leberthal, Nick Punto, Randy Wolf, Brett Meyers, Terry Adams, Vincente Padilla, Placido Polanco, Todd Pratt, Marlon Byrd, Jason Michaels, Ricky Ledee, Ramon Henderson, John Vukovich, David Bell, Jose Mesa and Gary Varsho. An autographed commemorative ball like this will not be available for long. Order it now and we will ship it out immediately. Due to the rare nature of this ball we must charge your credit card for the full amount as soon as we receive your order. This will ensure we reserve the ball for you. We will confirm your order by Email. This ball is not game used.