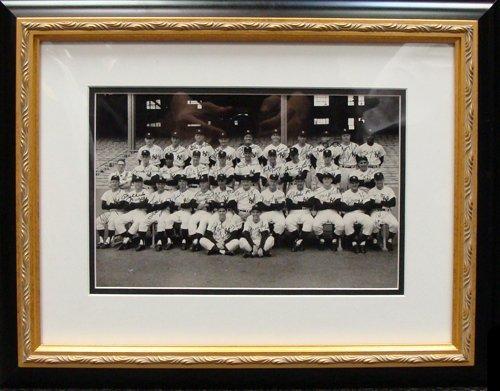 This team portrait of the 1959 New York Yankees features the images and signatures of some of the team’s greatest players, and some of the game’s finest as well. The photo comes from Ralph Houk’s estate, and was issued to team players and executives only that season. Thirty-two (32) signatures – including, it appears, the bat boys – are on this photo, and a Full Letter of Authenticity from PSA/DNA is included with your purchase. Order it now and we will ship it out immediately. All original signatures on this photo, written in vintage fountain pen, include those of Mickey Mantle and Casey Stengel – who rarely signed anything, as well asBob Turley, Eli Grba, Andy Carey, Duke Maas (a rare find), Hank Bauer, Ken Hunt, Clete Boyer, Marv Thronberry, Gary Blaylock, Hector Lopez, Gus Mauch (trainer), Norm Siebern, Elston Howard, Art Ditmar, Ryne Duren, Don Larsen, Ralph Terry, Jim Coates, Johnny Blanchard, Yogi Berra, Whitey Ford, Enos Slaughter, Bobby Richardson, Bobby Shantz, Frank Crosetti (3rd base coach), Jim Turner (pitching coach), Ralph Houk, Tony Kubek, Bill Skowron, Gil McDougald, and bat boys Pat Terry and Frank Prudenti. There are no fewer than 5 Hall of Fame signatures on this photo. Due to the rare and unique nature of this photo we will charge your credit card for the full amount immediately upon taking your order. This policy ensures we reserve this item for you. We will confirm your order by Email.