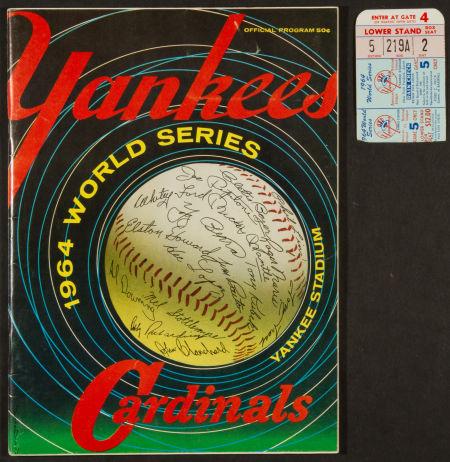 The 1964 World Series was the pinnacle of power for the St. Louis Cardinals – a team that had already captured three NL pennants that decade, and on the power of stars like Tim McCarver, Lou Brock, Curt Flood and, of course, Bob Gibson, returned once again to the World Series. The Yankees, however, would not see another World Series until the 1970s after the Cardinals won the ’64 Series in seven games. This piece of baseball history is something that a fan of either team, as well as collectors of rare sports memorabilia, will find quite appealing. This is a high-grade specimen – a Program from the 1964 World Series with just light spine wear/corner wear and still unscored, as well as a ticket stub from Game 5, which saw the St. Louis Cardinals defeated the New York Yankees 5-2. Bob Gibson pitched all 10 innings striking out 13. A rare find for sure – order it now before it is gone. Due to the singular nature of this offer we must charge your credit card for the full amount immediately upon taking your order. This ensures we reserve the item for you. We will confirm your order by Email. This piece is in stock now and ready to ship.