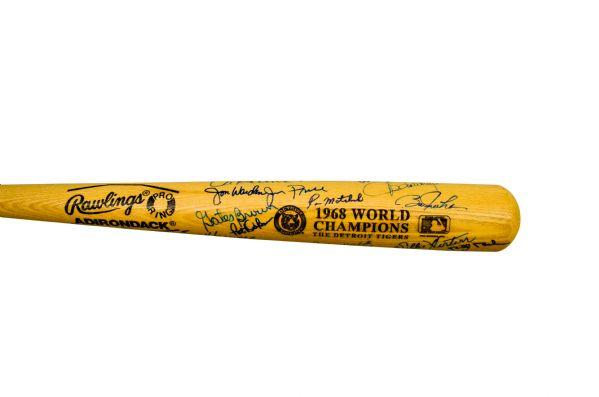 This is an official Rawlings Adirondak Bat created as a special tribute to the 1968 World Series Champion Detroit Tigers — signed by the members of that great team! The 1968 Tigers are one of those magical teams that only come along one in a decade. Blessed with the right balance between sheer talent and dynamic personalities, Detroit had it all in the summer of ’68 as the city, engulfed by horrific race riots, burned in the background. Led by leftie pitching ace Denny McLain and his 31 wins, the Tigers claimed the AL pennant after missing out in 1967 by just one game. Facing Bob Gibson and a tough Cardinals team, the exciting and hard-fought series went to seven games before Detroit finally prevailed. While McLain was the star of the regular season, it was the 2nd man in the Tigers rotation, Mickey Lolich, whose three complete game victories won the World Series for Detroit. Twenty-three (23) members of this memorable World Championship team have signed this Rawlings Commemorative bat including Hall of Famers Al Kaline, Eddie Mathews and Ernie Harwell. The other 20 key members are Denny McLain, Hal Naragon, Dick McAuliffe, Willie Horton, Bill Freehan, John Hiller, Mickey Stanley, Don Wert, Daryl Paterson, Johnny Sain, Earl Wilson, Wayne Comer, Jon Warden, Joe Price, Jim Northrup, Tom Matchick, Gates Brown, Pat Dobson and Bill Behm. PSA/DNA numbered sticker S10929 is affixed to the knob end. A Certificate of Authenticity from PSA/DNA is included with this purchase. Due to the rare nature of this bat we must charge your credit card for the full price immediately upon taking your order. This policy ensures we reserve the item for you. We will confirm your order by Email. This bat is not game used. Please allow at least 2 weeks for delivery.