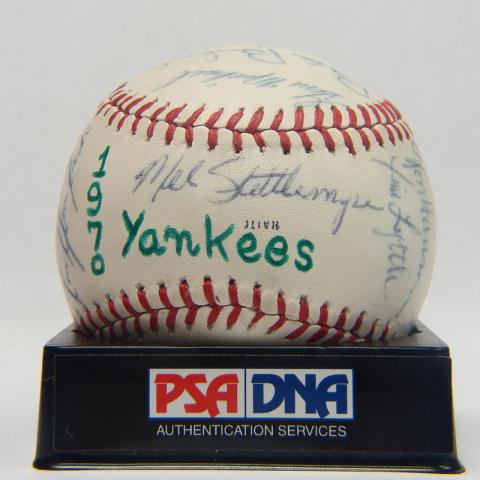 This is an official American League Baseball signed by the members of the 1970 New York Yankees, including the Mint Condition signature of Yankees’ rookie catcher Thurman Munson – 1970 Rookie of the Year. Every Yankees fan and collector of historic memorabilia will want this ball for their own. Authentication by PSA/DNA included with this ball. Munson died tragically in 1979, cutting short an amazing career during which he was a part of 2 World Series Championships, a 7 time All Star, League MVP in 1976, 3 time Gold Glove winner and team Captain from 1976 to 1979. The team played that remainder of the 1979 season without their beloved captain, and the franchise retired his number 15 the following season. Due to the rare nature of this ball we will charge your credit card for the full price immediately upon taking your order. This ensures we reserve the ball for you. We will confirm your order by Email. This ball is not game used. Please allow at least 2 weeks for delivery.