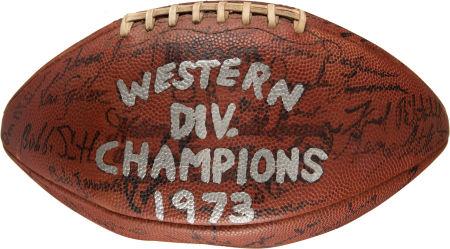 Oakland was beginning to establish itself as an AFC West powerhouse in 1973. The silver and black claimed its third division crown in four years. This Official NFL (Pete Rozelle) leather football pays tribute to that squad and is signed in black marker by at least 50 members of that great team. “Western Div. Champions 1973” is carefully written on a side panel in silver paint pen. Those players who signed the ball include: Bankston, Carroll, Sistrunk, Otto, Davidson, Hudson, Wilson, Tatum, Weaver, Warren, Vella, Blanda, Guy, Moore, Biletnikoff, Bubba Smith, Stabler, Horace Jones, Korver, Cline and many more. Hall of Famers on this ball include Fred Biletnikoff, Jim Otto, George Blanda and Bob Brown. Notables include Ken Stabler, Marv Hubbard, Bubba Smith, Daryle Lamonica, Jack Tatum and Ray Guy. This football comes with a Full Letter of Authenticity from James Spence Authentication and a Football Display Case. Due to the rare nature of this item we must charge your credit card for the full amount immediately upon taking your order. This policy ensures we reserve the ball for you. We will confirm your order by Email. This ball is not game used. Order by Dec. 16 for holiday delivery. Special note: The ball does not appear to hold air at this time. However the leak is at the valve and we will attempt to repair the seal.