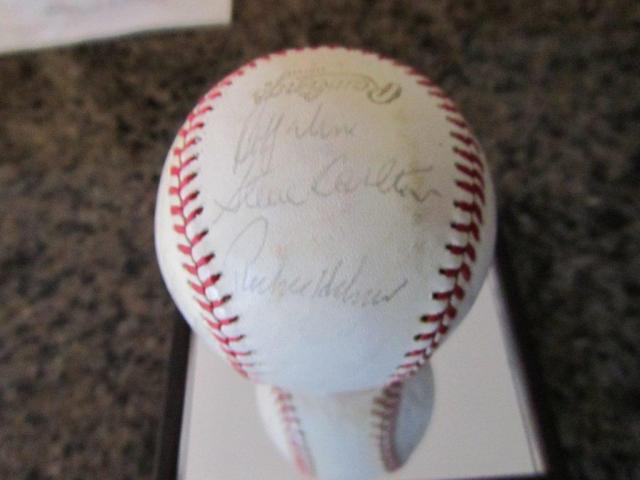 By winning 101 games during the 1977 season, the Philadelphia Phillies captured their second consecutive NL East crown. It was a great season in the City of Brotherly Love, and the start of something very special for the Phillies’ franchise as just three years later, in 1980, the Phillies won their first ever World Series. Many experts point to these teams of the late 70s as having laid the groundwork for the future championship season. This unique specimen is a fantastic tribute to a great season. This official Charles “Chub” Feeney NL baseball is signed by 22 members of that ’77 Phillies squad. Bold signatures on this ball include those of Steve Carlton, Bake McBride, Richie Hebner, Tim McCarver, Davey Johnson, Greg Luzinski, Tony Taylor, Jerry Martin, Larry Christensen, Warren Brusstar, Tom Hutton, Ollie Brown, Carrol Beringer, Bill Demars, Barry Foote, Gene Garber, Randy Lerch and Terry Harmon. This autographed baseball comes with a full Letter of Authenticity from James Spence Authentication – one of the industry’s most trusted names in sports memorabilia certification and authentication. Do not pass on this special piece of Phillies memorabilia. Add it to your collection today. We will allow one split on the purchase of this collectible, but must charge you for the full amount immediately upon receiving your order. This policy ensures that we reserve the item for the rightful purchaser. We will confirm your order by Email. This ball is not game used. Please allow 2 to 4 weeks for delivery.