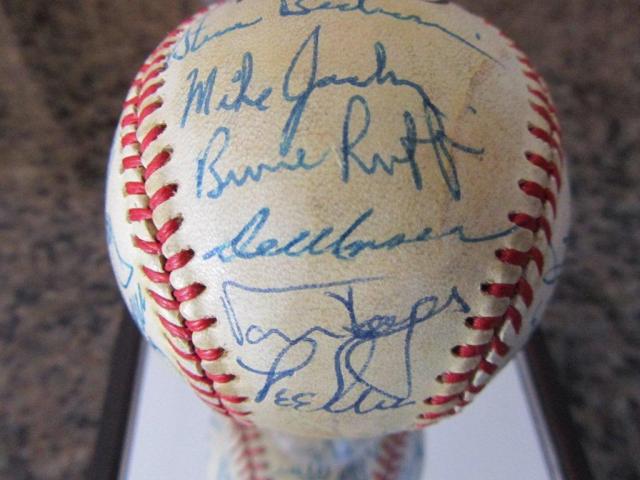 A Full Letter of Authenticity from James Spence Authentication comes with this official National League Baseball signed by 28 members of the 1986 Philadelphia Phillies. Under the leadership of Manger John Felske, the Phillies lingered just below .500 until after the All Star Break, at which point the team surged past the Cardinals and Expos, finishing just 2-1/2 games behind the eventual World Champion Mets. It was one of the most exciting seasons for fans. This ball features a very bold collection of signatures that any Phillies fan would love to have for their very own. In addition to Felske, this ball includes the signatures of Hall of Fame member Mike Schmidt, as well as Kent Tekulve, Von Hayes, Steve Bedrosian,Greg Gross, Gary Redus, Juan Samuel, coach Mike Ryan, Tom Hume, John Russell, Bruce Ruffin, coach Lee Elia, Dan Schatzeder, Mike Maddux, Ronn Reynolds, Kevin Gross, Charlie Hudson, Francisco Melendez, coach Claude Osteen, Jeff Stone, Don Carman, Ron Roenicke, Steve Jeltz, Glenn Wilson and Luis Aguayo. All signatures are very legible – Felske’s is somewhat faded. Order this ball now and we will ship it to you immediately. However, due to the rare nature of this offer we must charge your credit card for the full amount immediately upon receiving your offer. This ensures we reserve the ball for you. We will confirm your order by Email. This ball is not game used.