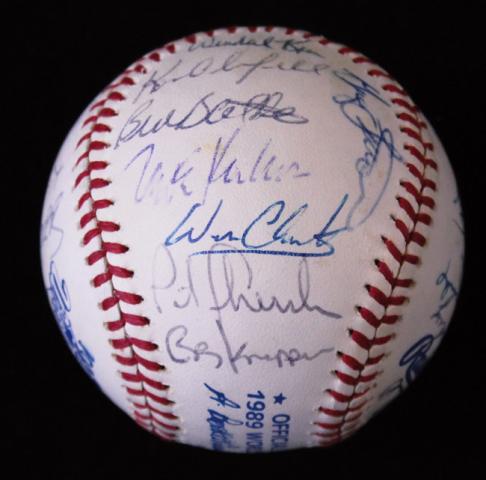 The 1989 San Francisco World Series ball is signed by 31 members of the 1989 NL Champion Giants including Roger Craig, Will Clark, Terry Kennedy, Robby Thompson, Jose Uribe, Ernie Riles, Brett Butler, Rick Reuschel, Matt Williams, Don Robinson, Scott Garrelts, Craig Lefferts, and others. Signatures rate 6/7 to 9/10 (average of 8) out of 10 and the ball displays a few small areas of minor toning.   The 1989 Giants made it to their first World Series since 1962, with a 3-2 win over the Cubs to win the 1989 National League pennant, four games to one.  In the 1989 World Series, Will Clark hit .650 with eight RBI, and his stellar performance earned him Most Valuable Player honors for the Giants.  The ball is fully authenticated and would make a perfect addition to the collection of any Giants fan! Due to the rare nature of this offer we must charge your credit card for the full amount immediately upon taking your order. This policy ensures we reserve the ball for you. We will confirm your order by Email. This ball is not game used. Please allow at least 2 weeks for delivery.