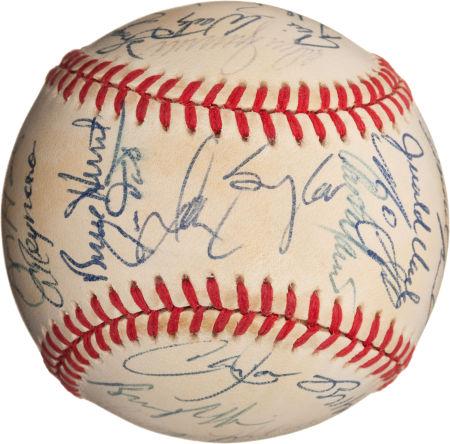 The year was 1993 and Denver was home to Major League Baseball – the Colorado Rockies made their National League debut. This is an official National League Baseball autographed by the members of the 1993 Colorado Rockies with signatures from 34 players on the expansion squad roster. This can be a special piece of MLB and Rockies team history that loyal fans of the Rockies will want for their very own. Occupying the sweet spot is the autograph of Rockies Manager Don Baylor. Signatures by notable players such as Charlie Hayes, Bruce Hurst, Alex Cole and Joe Girardi are graded an 8 out of 10. Other players on the team that year included Eric Wedge, Dale Murphy, Dante Bichette, Eric Young, Adres Galarraga, Vinny Castilla and many others. It was just the start of something great.  Because this is a one-of-a-kind piece of Rockies memorabilia we must charge your credit card for the full amount of this purchase immediately upon receiving the order. We will confirm your order by Email. This is an official National League Baseball. This item is in stock now and ready to ship.