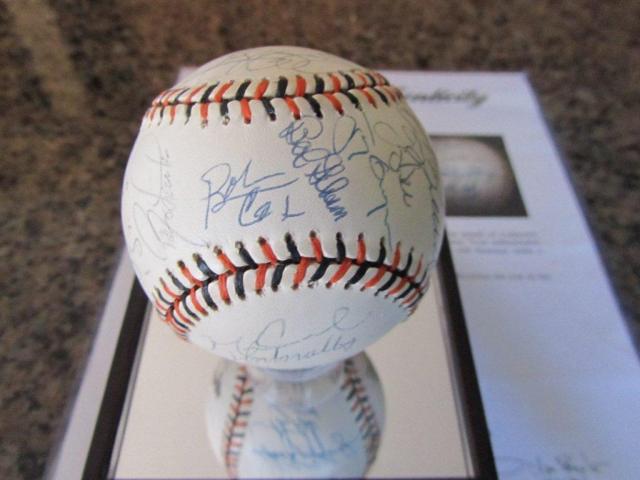 This is an official Rawlings 1993 All Star Game Baseball autographed by 32 players and coaches from the National League team including honorary captain Bob Gibson. A full Letter of Authenticity from James Spence Authentication accompanies this fine collectible, as it contains the signatures of Hall of Fame members, and several major league stars of the era. This is a rare find so make your purchase now. Signatures on this baseball include Gibson, Hall of Fame members Tony Gwynn and Ryne Sandberg, NL All Star players and coaches Barry Bonds, Terry Mulholland, John Burkett, Jay Bell, Bobby Cox, John Kruk, Jim Fregosi, Dave Hollins, Darryl Kile, Steve Avery, Lee Smith, Darren Daulton, Andres Galaraga, Tom Glavine, John Smoltz, Robby Thompson, Bryan Harvey, Barry Larkin, Mark Grace, Marquis Grissom, Greg Jefferies, Dave Justice and others. This special piece of All Star Game memorabilia will generate strong demand among collectors and game historians – especially those who seek items with signatures of Hall of Fame members, and players who may very likely join the Hall in the near future – such as Glavine, Smoltz, Larkin or Smith. We do not expect this fine specimen to be available for long. In order to reserve this collectible baseball for the purchaser, we will charge your credit card for the full amount immediately upon receiving your order. We will confirm the order by Email. This ball is not game used. This item is in stock now and ready to ship.