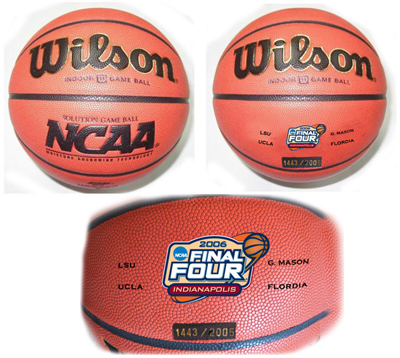 This is the ball used in the 2006 Final Four, with the exception that a commemorative panel is added that includes the names of the four schools participating in the Final Four, the official logo of the Final Four and the dates of the tournament inscribed in color. THIS BALL IS NOT SOLD IN ANY STORES AND INDIVIDUALLY HAND NUMBERED AND LIMITED TO 2006. Order yours now! “As the NCAA enters its third tournament with the Wilson Official NCAA Game Ball, the basketball committee continues to receive outstanding feedback regarding the “feel” and performance of the ball,” says Greg Shaheen, NCAA VP of Men’s Basketball and Championship Strategies. “The NCAA looks forward to continuing its evolving relationship with Wilson. The Wilson Official NCAA Game Ball is the only moisture-absorbing basketball that gives players better control when the game heats up,” says Mike Kuehne, Director of Basketball for Wilson Sporting Goods. “Once players use it in competition, they find every other game ball feels inferior. In blind play-testing eight out of ten players prefer the Wilson NCAA Game Ball over traditional balls.” Behind the NCAA Game Ball’s regulation weight and size are exclusive technologies that improve player performance in heated competition. The patented cover is made of moisture-absorbing composite leather. While other balls become slippery when wet, this cover absorbs moisture and grows tackier. Grip is further improved with composite leather laid-in channels, which absorb moisture and are 50 percent deeper than conventional channels. The basketball is also constructed with Cushion Core Technology, combining a low-density sponge rubber with a durable butyl rubber for a softer, more positive touch. Together, the cover, channels and core make the NCAA Game Ball three-times more palmable when wet than a traditional basketball. HAND NUMBERED LIMITED EDITION OF 2006. *This ball is not game used.