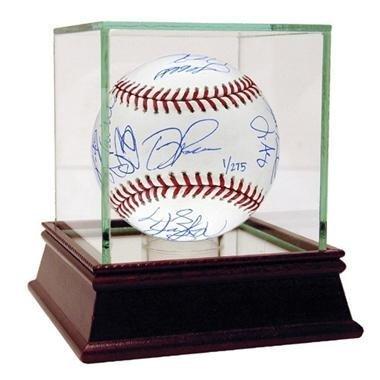 Coming off a disappointing 2006 season, the Boston Red Sox turned things around in 2007 and went on to claim the team’s second World Series Championship in just four season. Here is a piece of historic memorabilia from that Championship season that every Boston Red Sox fan would love for their own collection. This is an official 2007 World Series Baseball signed by 24 members of the Champion Boston Red Sox, who defeated the Colorado Rockies with a swift 4 games to none sweep in the final series. Many of that season’s great players signed this baseball, as well as a number who remained on the roster for the 2013 season. This baseball is hand signed by Luis Alicea (coach), Alex Cora, Manny Delcarmen, Jacoby Ellsbury, John Farrell (coach), Eric Hinske, Bobby Kielty, Jon Lester, Javier Lopez, Mike Lowell, Julio Lugo, Dave Magadan (coach), Doug Mirabelli, Jonathan Papelbon, Dustin Pedroia, Manny Ramirez, Kyle Snyder, Mike Timlin, Kevin Youkilis, David Ortiz, Jason Varitek, Josh Beckett ,Terry Francona (manager), and Curt Schilling. This baseball comes from a Limited Edition set of only 275 baseballs and includes a Steiner Sports Certificate of Authenticity as well as a MLB Authentication hologram. Due to the limited nature of this offer we must charge your credit card for the full amount immediately upon taking your order. This policy ensures we reserve the ball for you. Only two are available. We will confirm your order by Email. This ball is not game used. Please allow at least 2 weeks for delivery. Please note the ball shown is not the ball that is available. Is is presented for display only.