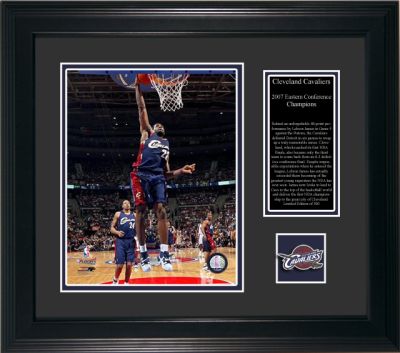 This limited edition commemorative framed photo plaque is the perfect piece of NBA memorabilia that fans of the Cleveland Cavaliers will want in celebration of the team’s return to the NBA Finals! Only 500 are available so order yours now! Featuring a photo of team leader and certain hall-of-famer Lebron James, this collectible piece is displayed on a blackwood frame and measures 15″ x 17″. This special collectible framed photo makes the perfect gift for any Cavs fan, but this is a limited edition piece; only 500 are available so order yours today! In addition to the gloss photo, this piece includes a Cavs logo pendant and an etched plaque paying tribute to the Eastern Conference Champion Cleveland Cavaliers. The plaque on this piece reads: Cleveland Cavaliers 2007 Eastern Conference Champions Behind an unforgettable 48-point performance by Lebron James in Game 5 against the Pistons, the Cavaliers defeated Detroit in six games to wrap up a truly memorable series. Cleveland, which reached its first NBA Finals, also became only the third team to come back from an 0-2 deficit in a conference final. Despite impossible expectations when he entered the league, Lebron James has actually exceeded them becoming one of the greatest young superstars the NBA has ever seen. James now looks to lead the Cavs to the top of the basketball world and deliver the first NBA Championship to the great city of Cleveland. Limited Edition of 500 This is an exclusive collectible that is NOT AVAILABLE IN STORES! Loyal and avid fans of the Cleveland Cavaliers will generate strong demand for this limited edition collectible so order yours today! LIMITED EDITION OF 500! Your credit card will be charged immediately upon placing your order so we can reserve your LIMITED EDITION collectible.