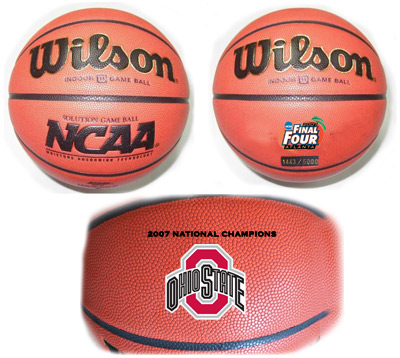 LIMITED EDITION OHIO STATE BUCKEYES 2007 NATIONAL CHAMPIONSHIP COMMEMORATIVE BASKETBALL NOTE FINAL BALL HAVE MINOR CHANGES The Ohio State Buckeye Basketball Team has returned its program to national glory. With a team made up of sensational freshmen and several key returning players, the Buckeyes won the school’s first NCAA Basketball National Championship in over 30 years. Share in the history by obtaining this LIMITED EDITION commemorative Final Four basketball. This is the same basketball used in the championship game, except a third panel was added to honor the 2007 Champion Ohio State Buckeyes. This special piece of college basketball memorabilia is LIMITED TO ONLY 5,000! ORDER YOURS NOW! Led by third-year coach Thad Matta, this group of talented players captured the 2007 NCAA Basketball Championship by defeating the defending champion Florida Gators on Monday, April 2, 2007. All season long the Buckeyes received outstanding play from heralded freshmen Greg Oden ,Mike Conley Jr., and Daequan Cook, senior leaders Ron Lewis and Iv an Harris, and starting guard Jamar Butler, as well as several other contributors who helped this team make it’s mark on college basketball history. This is a limited edition commemorative basketball. ONLY 5,000 ARE AVAILABLE SO ORDER YOURS NOW! Do not accept substitutes. This ball will not be available in stores so get your piece of history right here, right now! Get yours for only $89.95 and $15.00 for shipping. PLEASE USE PAYPAL FOR QUICKER DELIVERY PLEASE ALLOW 4 – 6 WEEKS FOR DELIVERY. This ball is not game used. Click here for a larger image of this product.