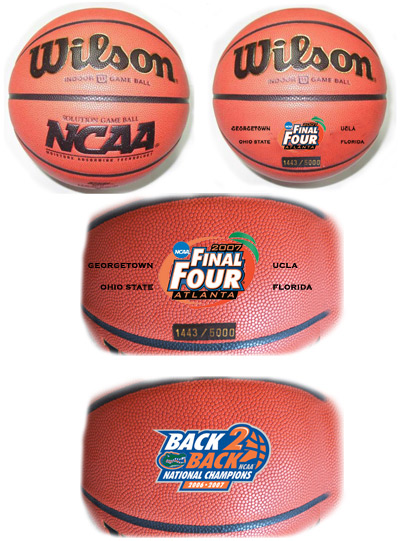 LIMITED EDITION FLORIDA GATORS 2007 NATIONAL CHAMPIONSHIP COMMEMORATIVE BASKETBALL The Florida Gators did it again! Back-to-back championships earned by this talented group have placed them among the best college basketball teams in history. Share in the history by obtaining this LIMITED EDITION commemorative Final Four basketball. This is the same basketball used in the championship game, except a third panel was added to honor the 2007 Champion Florida Gators. This special piece of college basketball memorabilia is LIMITED TO ONLY 5,000! ORDER YOURS NOW! Led by Coach Billy Donovan, and a group of returning starters that includes sure-fire NBA players like Joakim Noah and Al Horford, the Florida Gators earned their second consecutive NCAA Basketball Championship by defeating the Ohio State Buckeyes on Monday, April 2, 2007. All season long the Gators received outstanding play by Noah, Horford, Lee Humphrey, Corey Brewer, Taurean Green and several other contributors who helped this team make it’s mark on college basketball history. This is a limited edition commemorative basketball. Only 5,000 are available, so order yours now! Do not accept substitutes. This ball will not be available in stores so get your piece of history right here, right now! Your credit card will be charged immediately upon placing your order so we can reserve your LIMITED EDITION collectible. This ball is not game used.