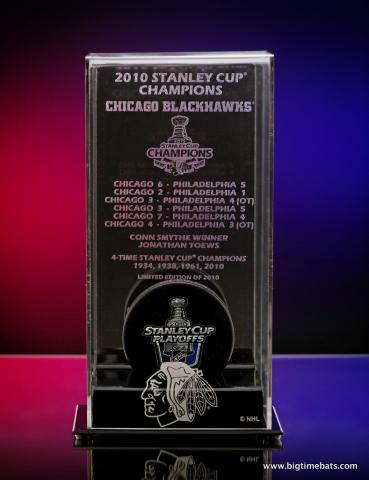 Note – the image shown of this product is a sample. Your puck will be the exclusive Stanley Cup Champions puck. Your display case will be etched with correct scores and accurate details. The Madhouse on Madison just got a little louder. It’s been nearly 50 years, but the Blackhawks have finally brought the Stanley Cup to Chicago after dispatching the Flyers in a hard-fought championships series. To help Blackhawk fans celebrate their team’s great season and Stanley Cup title we are pleased to present a Limited Edition Stanly Cup Champions Chicago Blackhawks Logo Puck and Display Case. The regulation size puck features the team logo on one side and the NHL Stanley Cup Champions logo on the other, and the custom display case is laser etched with the final scores from each game in the series and the name of the Conn Smyth Trophy Winner. This is a limited edition piece so you must order yours today.  The Chicago Blackhawks finished the regular season with a franchise record high for both wins and points on the season. After knocking off both the Predators and Canucks, the Hawks swept the Sharks before facing off with the Eastern Conference Champion Flyers. Great goaltending, physical defense and timely scoring aided the Blackhawks in delivering Chicago’s first hockey championship since 1961. Order this rare Championship Collectible now before they are gone. Due to the limited nature of this item we will charge your credit card for the full amount of this purchase immediately upon receiving your order. This will ensure we reserve your logo puck and display case. We will confirm your order by Email. Please allow 4 to 6 weeks for delivery. This puck is not game used.