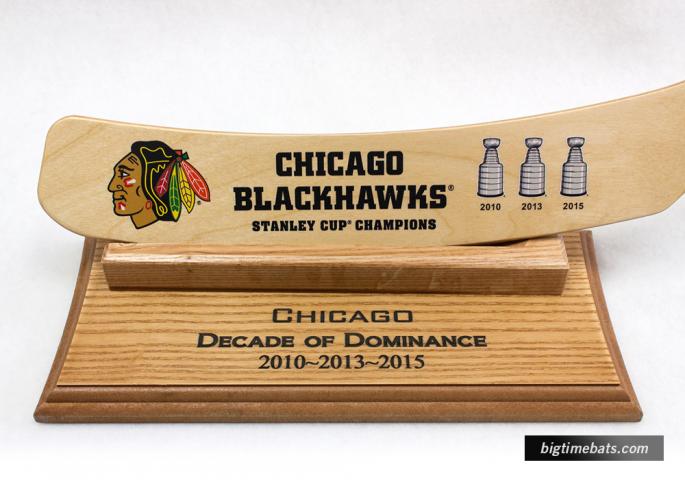 In one of the closest Stanley Cup Final series ever contested the Chicago Blackhawks emerged as NHL Champions for the sixth time in franchise history. To honor the 2015 Stanley Cup Champions we are pleased to present this Commemorative Stick Blade and Display Deluxe Set for Blackhawks fans celebrating their team’s third NHL title in just six years. This beautiful stained birch commemorative full size blade features the Blackhawks’ logo and the Stanley Cup. The three most recent Championship seasons are listed under the Cup with the words, “Decade of Dominance.” The custom display is the ideal complement for what is perhaps one of the most unique pieces of Championship Season memorabilia ever released. The stand is laser engraved with the phrase, “Decade of Dominance.” along with the years 2010, 2013 and 2015. Due to the limited nature of this offer we must charge your credit card for the full price immediately upon taking your order. This policy ensures we reserve a set for you. We will confirm your order by Email. This stick blade is not game used. Please allow 4 to 6 weeks for delivery.