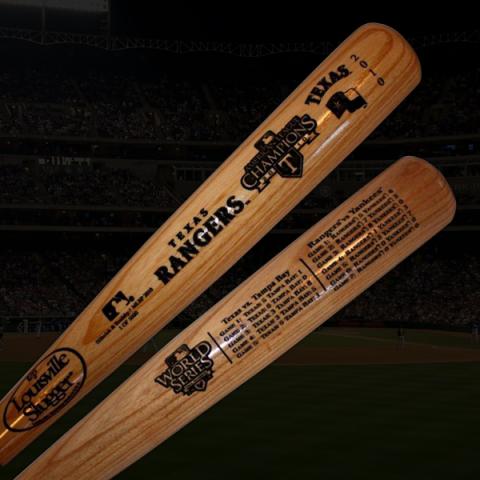 The Texas Rangers have delivered a great season of baseball for fans, and the ride isn’t over yet. In capturing the team’s first American League Pennant the Rangers will compete in their first-ever World Series Championship. To honor this very special season we are pleased to present this 2010 American League Champion Texas Rangers Commemorative Louisville Slugger. This authentic Louisville Slugger bat is a beautiful collectible that will look great on the wall of your home or office, but it is a Limited Edition so you must order yours now. Designed and crafted in the same manner as bats used by Major League Hitters in both leagues, this authentic Louisville Sluggers makes a very special piece of Rangers Memorabilia. Laser engraved with the team logo, the results of the ALCS games played and the official AL Champions logo,  Rangers fans are sure to make quick work of this Limited Edition Championship Season Bat. Order yours now. Solid contributions all season long and throughout the playoffs from Michael Young, Josh Hamilton, Cliff Lee, Bengie Molina, Vlad Guerrero, Neftali Feliz and so many others up and down the Rangers’s rosters have turned this season into a year to remember for the team’s loyal fans. Manager Ron Washington certainly appears the likely front runner for AL Manager of the year for guiding this team past two AL East power houses and into the World Series. Order this special commemorative Louisville Slugger today to celebrate the Rangers’ first-ever World Series appearance. Due to the limited supply of this special Louisville Slugger we must charge your credit card for the full amount of this purchase immediately upon receiving this order. This will ensure we reserve a Rangers Championship Bat for you. We will confirm your order by Email. Please allow 4 to 6 weeks for delivery. This bat is not game used.