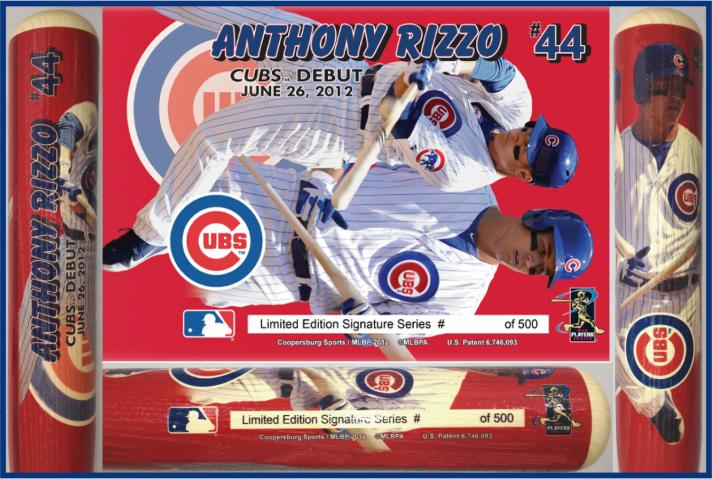 When it comes to sports memorabilia, the most sought after items are the first edition rookie season collectibles. Bigtime Bats is releasing a unique item that encompasses this concept of first release collectibles. We find it very exciting and think you will too. Anthony Rizzo is the Cubs first baseman around whom new management is building the future of the team, and Cubs fans have not been disappointed since the young slugger was called up from Triple A. On June 30, 2012, just four days after his promotion to the Majors, Anthony Rizzo launched his first home run as a Chicago Cub. To celebrate that special event Anthony has personally signed 500 bats – each inscribed, “1st Cubs HR 6-30-12” – created in commemoration of his debut with the team on June 26th. These bats feature vivid, wrap-around photography of the young phenom. Cubs fans will generate strong demand for this piece of memorabilia so order yours now. Each bat includes a Certificate of Authenticity from Mounted Memories. Anthony Rizzo became first player in Cubs history to have three game-winning RBIs in his first five games with the team. He hit seven homers in July, the most by a Cubs rookie in a calendar month since Mel Hall hit nine in August 1983. He also led NL rookies that month in homers, hits (32), RBIs (17) and total bases (55). He ranked second among NL rookies in runs scored (14), and he was third with a .330 batting average, .375 on-base percentage and .567 slugging percentage. He was named the league’s July “Rookie of the Month.” Due to the limited nature of this series we must charge your credit card for the full price immediately upon taking your order. This policy ensures we reserve a bat for you. We will confirm your order by Email. This bat is not game used. Please allow at least 2 weeks for delivery.