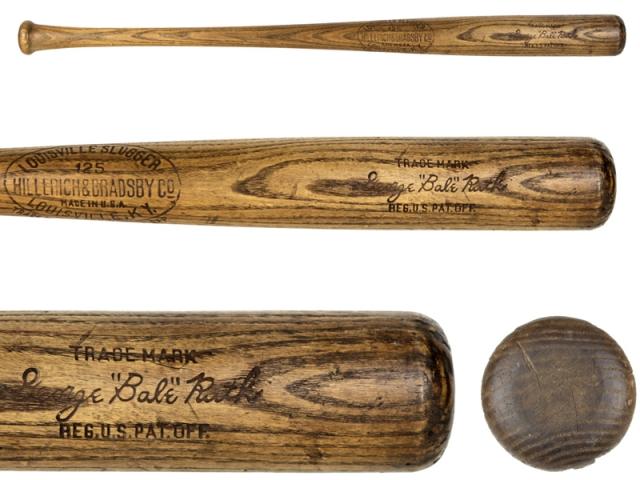 You’ve heard of the “House that Ruth Built,” and seen the film footage of the great Babe Ruth so it is difficult sometimes to imagine the reality of George Herman “Babe” Ruth hitting tape measure home runs. Today Big Time Bats brings that reality closer to home with an actual Babe Ruth Louisville Slugger signature model game used bat. If ever you considered adding a Babe Ruth game used bat to your collection this is the specimen for you – circa 1923 – 1925! Without question, 1923 through 1925 stands out as Ruth’s glory years during which he won his lone AL MVP while hitting 41 home runs and 131 RBIs with a .393 batting average during the 1923 season. This bat is absolutely stunning; an original Hillerich & Bradsby Babe Ruth signature model (pre-model number) with a labeling period of 1923-1925. This bat weighs 33 oz., measures 33.5″ and is built to pro specifications of the era. Because vintage wood bats lose weight over the years, this bat easily matches the documented exemplars of the 36 to 40 oz. bats Ruth is believed to have swung. This game used relic is over 80 years old and in stunning condition. This bat is not a store model bat; bats produced for mass consumption were branded as 40BR or LS125, with inch marks stamped into the knob. This game representation, by contrast, is professional in nature with turned knob and high-grade wood, and consistent with the bats ordered by the Yankees organization from Louisville Slugger during that time period. This bat exhibits obvious signs of heavy game use consistent throughout and has been authenticated by renown game bat experts MEARS (Dave Bushing, Troy Kinunen). It’s no secret that a Ruth game used bat is among the most desired artifact among serious collectors and memorabilia hobbyists. Examples of bats used by Ruth during the 1930s sold have auction have gone from in excess of $60,000 to $70,000. Without question, this is the game used piece any serious Yankee collector has dreamed of holding – a Babe Ruth professional model game used bat. Bottom line, if you considered adding a Ruth gamer to your collection this 1923-25 model is far more desirable than bats built and used during the 1930s.