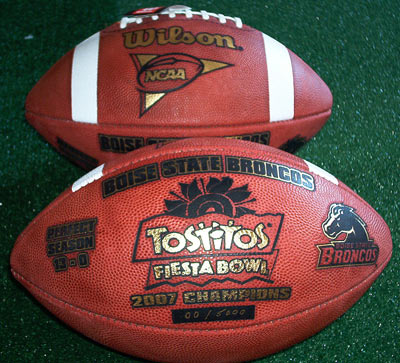 LIMITED EDITION BOISE STATE UNDEFEATED SEASON COMMEMORATIVE FOOTBALL Celebrate the season of the nation’s ONLY undefeated team from the 2006 college football season – the Boise State Broncos – and their Fiesta Bowl Championship with a just-released limited edition commemorative football. Proudly display this rare piece of authentic sports memorabilia in your home to honor the 2006 Western Athletic Conference Champions, Fiesta Bowl Champions and undefeated Boise State Broncos, the season’s only undefeated college football team. Order yours now! This is the same ball used in the Fiesta Bowl played on Jan. 1, 2007 between Boise State and University of Oklahoma, except a third commemorative panel has been added to honor the undefeated Boise St. Broncos and their thrilling overtime victory in that school’s first-ever BCS bowl game appearance. The football is made in American and is limited to 5,000 hand numbered footballs. Avid and loyal BOISE STATE BRONCO fans celebrating their team’s Fiesta Bowl victory, and #5 ranking in the season’s final AP poll are expected to generate high demand for this commemorative football. This ball is not sold in stores, so order yours now! This is the official football of the NCAA from Wilson, it comes with a Wilson made in America tag, in a Wilson factory box and a Wilson hand numbered certificate. This ball is not available in stores. Place your order now! Do not accept substitutes get the real game ball. The value is in the game. *These footballs are not game used. Limited edition of 5,000. Order yours now! Your credit card will be charged immediately upon placing your order so we can reserve your LIMITED EDITION collectible.