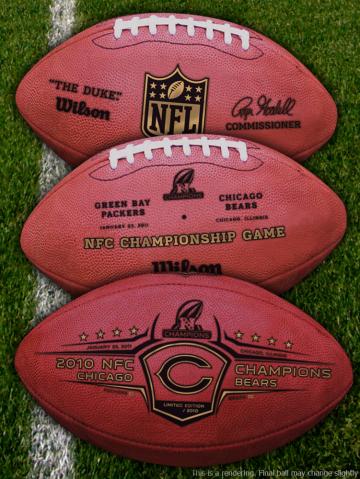 The Chicago Bears are packing their bags for Dallas, and the Packers are going home! The Chicago Bears earned a trip to the Super Bowl in dispatching the rival Packers in the NFC Championship Game in Soldiers Field. The Chicago fans are celebrating this great triumph and we are please to present a beautiful commemorative football honoring the team with this Authentic Chicago Bears 2010 NFC Champions Official Wilson Football. Bears fans are already generating swift demand for all Championship memorabilia – this is a limited edition so you must place your order now to ensure you receive this Authentic NFC Champions football. THIS IS AN NFC CHAMPIONSHIP GAME BALL WITH A THIRD COMMEMORATIVE PANEL ADDED TO HONOR THE CHICAGO BEARS AND THEIR NFC CHAMPIONSHIP. THIS IS THE SAME BALL USED IN THE HISTORIC GAME AT SOLDIER FIELD EXCEPT A THIRD COMMEMORATIVE PANEL HAS BEEN ADDED TO COMMEMORATE THE NFC CHAMPION CHICAGO BEARS. Wilson is the official football of the NFL, and created this beautiful football to honor the Bears and their championship season. Logos, team names and final score are gold embossed on this beautiful official Wilson football. Display your Bears pride with style; NFL memorabilia this special will look great on a shelf in your home or office. Get yours today before they are sold out. Due to the limited number of Chicago Bears NFC Championship Game footballs available we will charge your credit card for the full purchase amount immediately upon receiving the order. We will confirm your order by Email. Please allow 4 to 6 weeks for delivery. This ball is not game used.