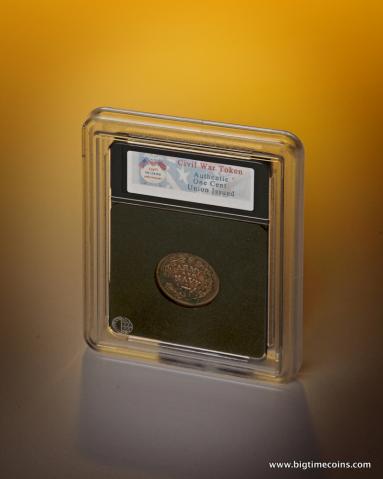 Civil War tokens are coins that were privately minted and distributed in the United States between 1862 and 1864. The wide spread use of the tokens was a result of the scarcity of government issued cents during the Civil War. You may obtain an Original Civil War Token packaged in a hard, plastic coin holder display. Each coin includes a special label and story card with information about the token’s design. Tokens will be of random date and design. By 1862, the second year of the Civil War, government-issued coinage began vanishing from circulation. American citizens hoarded all coins with gold and silver, and eventually began hoarding copper-nickel cents as well. This made it extremely difficult for businesses to operate. In response, many merchants turned to private minters to fill the void left by the hoarded coins.·             On April 22, 1864, Congress enacted the Coinage Act of 1864. While the act is most remembered for the introduction of the phrase “In God We Trust” on the newly created two-cent piece, it also effectively ended the usage of Civil War tokens. While the Coinage Act made Civil War tokens impractical, the issue of their legality was decided on June 8, 1864, when Congress enacted 18 U.S.C. § 486, which made the minting and usage of non-government issued coins punishable by a fine of up to $2,000, a prison term of up to five years, or both. It did not make it illegal to own Civil War tokens, however, and evidence exists that the tokens were viewed as collectibles as early as 1863. Patriotic Civil War tokens typically displayed a patriotic slogan or image on one or both sides. Since the majority of these tokens were minted in Union states, the slogans and images were decidedly pro-Union. Some common examples of slogans found on patriotic tokens are “The Union Must and Shall Be Preserved,” “Union For Ever,” and “Old Glory”. Protective clear, acrylic display case permits viewers to examine both sides of this very rare, very unique war-era coin issued by the United State of America, which comes with a full Certificate of Authenticity. This is a find that any collector will desire to acquire. Order it now. Due to the rare nature of this piece we must charge your credit card for the full amount immediately upon receiving your order. This will ensure we reserve the item for you. We will confirm your order by Email. Please allow 2 to 3 weeks for delivery.