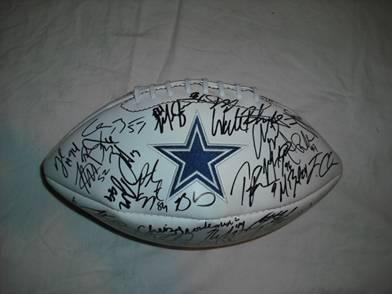 Despite some tough losses early on the schedule, the current season looks good for the Dallas Cowboys. The Cowboys fans are long considered some of the most loyal, and they have great hope for this year’s team which features returning stars at the skill positions on offense and a defense that opponents must game plan for in order to hold at bay. To celebrate this new season of excitement we are pleased to offer this Dallas Cowboys Team Logo Football personally signed by 48  members of the 2010-11 team including: Wade Phillips, Mat McBriar, Jon Kitna, Tony Romo, Roy Williams, Sam Hurd, David Buehler, Austin Miles, Mike Jenkins, Tashard Choice, Marion Barber, Felix Jones, Orlando Scandrick, Deon Anderson, Micheal Hamlin, Danny McCray, Terence Newman, Barry Church, Gerald Sensabaugh, Chris Gronkowski, Sean Lee, Keith Brooking, Leon Williams, Bradie James, Victor Butler, Jason Williams, Brandon Williams, Andre Gurode, Leonard Davis, Alex Barron, Stephen Bowen, Marc Colombo, Sam Young, Robert Brewster, Martellus Bennett, Jason Witten, Kevin Olgetree, Dez Bryant, Jay Ratliff, Anthony Spenser, DeMarcus Ware, Marcus Spears, Jason Hatcher, Igor Olshansky This team signed item was obtained through Who’s Who Productions, which uses autograph crews to obtain the signatures while the players are moving about (Hotel Lobbies, outside the Stadium, outside of restaurants, etc.). Who’s Who has been in business since 1993 and is the only company in the world that sets up autographed items in the Super Bowl venue, and works directly with the NFL. These footballs were sent to Forensic Handwriting Expert Christopher Morales, a court qualified forensic science expert who formerly worked for the US Secret Service as an examiner of Questioned Documents- (forgeries).  He has written a full page letter of authenticity, which includes a picture of the piece, a full list of the players that signed and, of course, his stamp of authenticity on all of the signatures.  Due to the very limited number of autographed footballs available we will charge your credit card for the full amount of this purchase immediately upon receiving this order to ensure we reserve your authentic memorabilia. We will confirm your purchase by Email. Please allow 2-3 weeks for delivery. This ball is not game used.