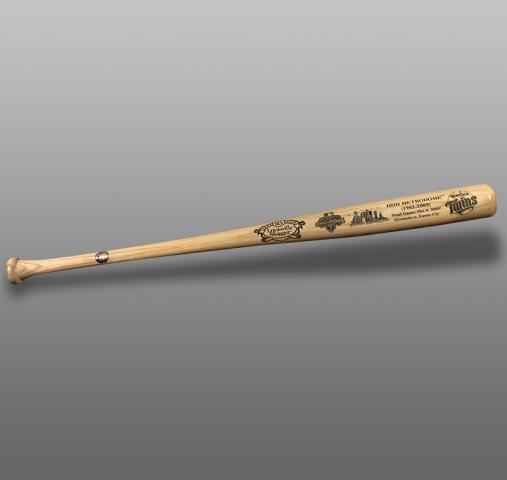 In 1982 the Minnesota Twins moved into the climate controlled environment of the Hubert H. Humphrey Metrodome, and on Oct. 4, 2009, the Twins hosted the Kansas City Royals in what was the final regular season home game to be played in that stadium. On Oct. 6th the team hosted the one-game playoff against the Detroit Tigers to determine the winner of the AL Central. To celebrate the Twins’ 27 seasons in the “Hump-Dome” Louisville Slugger has created this authentic Final Game Bat with AL Central Champions logo commemorative bat to honor the team, its fans and the dome. This is a limited edition authentic Louisville Slugger so you should place your order now. The Twins won 5 divisional championships – including this season, two American League Championships and two World Series titles while calling the dome their home. Louisville Slugger has engraved this bat with all the important dates and statistics of the HHH Metrodome. This rare collectible will look fantastic on the wall in the office or home of any Twins fan. This bat was manufactured in the same manner as every bat created by Louisville Slugger for major league hitters across the country. Manager Ron Gardenhire relied on players like Nick Punto, Jason Kubel, Orlando Caberra, Michael Cuddyer and Joe Mauer for defense and hitting, while pitchers Carl Pavano, Scott Baker and Nick Blackburn led starting rotation. Closer Joe Nathan converted on 47 of 52 Save opportunities to put the Twins in a position to catch the Tigers on the last day of the season. Get your Limited Edition AL Central Champs Louisville Slugger now, before the are gone. Due to the limited nature of this collectible we will charge your credit card for the full amount of your purchase immediately upon receiving your order to ensure we reserve your Twins AL Central Louisville Slugger bat. We will confirm your order by Email. Please allow 4 to 6 weeks for delivery. This bat is not game used. Note: Bat design awaiting final MLB approval.