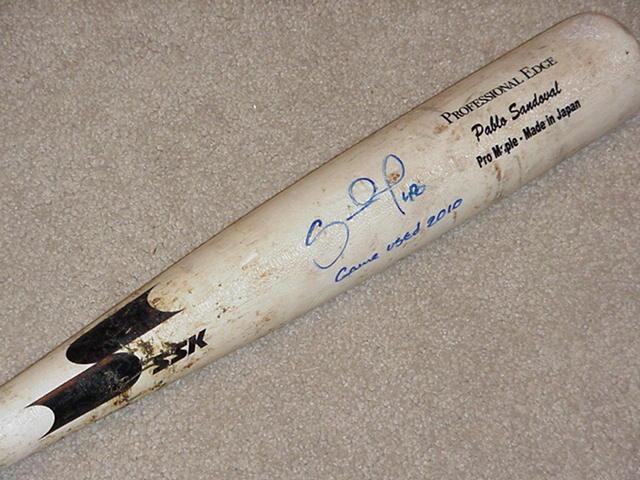 Hugely popular throughout the Bay area, Pablo Sandoval or “Kung Fu Panda” as he’s know to Giants’ fans, is an emerging superstar 3rd baseman. Only 23 years old, Sandoval hit .330 and .345 in his first two seasons in the Major Leagues. Today’s Daily Bat Man Special available exclusively at BigTimeBats.com will appeal to Giants fans everywhere anxiously awaiting the start of the 2010 MLB Playoffs. This is a killer Pablo Sandoval game used bat from the 2010 season. This SSK gamer measures 34′ in length and is a blocked letter model #O23PS; the bat is uncracked, but features abundant game-use evidence including bat rack marks, ball and stitch impressions, ink transfers and pine tar on the handle. This bat was signed “Pablo Sandoval #48 Game Used 2010” in blue on the barrel. This bat includes a Letter of Authenticity from PSA/DNA. Giants fans and collectors of premium game-used memorabilia will not hesitate to snap up this great Sandoval gamer. Get it now!