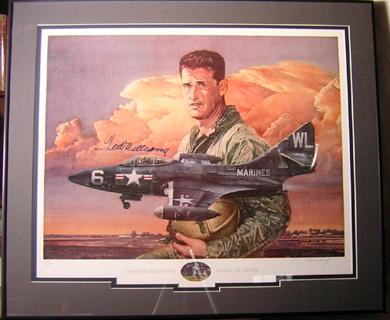 Besides being one of baseballs greatest hitters, Ted Williams was a Patriot. Putting his highly successful baseball career on hold when recalled to active duty, Williams rejoined the United States Marine Corp and patrolled the skies over Korea in a Gruman F9F Panther. This beautiful 25″ x 28-1/2″ Framed Litho created by renown sports artist Merv Corning, signed by Ted Williams in bold, blue ink shows Capt. Williams in flight uniform posed behind a scene of his aircraft over the skies of the Korean peninsula. Sports memorabilia and art collectors will immediately recognize the rare value in this special treasure. Frame exhibits light wear. Williams’ autograph measures six inches across and 1-1/2 inches high – easy to see and read from anywhere in the room in which it is displayed. The litograph is also signed and hand-numbered, 146/999. A full Letter of Authenticity from PSA/DNA comes with your purchase. Due to the very limited nature of this item we will charge your credit card for the full amount of this purchase immediately upon receiving the order. This will ensure we reserve this collectible for you. We will confirm your order by Email. Ready for shipping. Ted’s Service Story On May 1, 1952, at the age of 34, Ted was recalled to active duty for service in the Korean War. He hadn’t flown from some eight years, but turned away all offers to sit out the war in comfort as a member of a service baseball team. After eight weeks of refresher flight training and qualification in theF9F Panther jet at Marine Corps Air Station Cherry Point, North Carolina, he was assigned to VMF-311, Marine Aircraft Group 33 (MAG-33), based at K-3 airfield in Pohang, Korea. On Feb. 16, 1953, Williams was part of a 35 plane strike package against a tank and infantry training school just south of Pyongyang, North Korea. During the mission a piece of flak knocked out his hydraulics and electrical systems, causing Williams to have to “limp: his plane back to K-13, and Air Force base close to the front lines. For his action of this day he was awarded the Air Medal. Williams eventually flew 39 combat missions before being pulled from flight status in June 1953 after a hospitalization for pneumonia. During the ware he also served in the same unit as John Glenn and in the last half of his missions, he was serving as Glenn’s wingman. While these absences, which took almost five years out the heart of great career, significantly limited his career totals, he never publicly complained about the time he devoted to military service. Williams had a strong respect for Gen. Douglas MacArthur, referring to him as his “idol.” For Williams’ 40th birthday, MacArthur sent him an oil painting of himself with the inscription, “To Ted Williams- not only America’s greatest baseball player, but a great American who served his country. Your Friend, Douglas MacArthur, General U.S. Army.