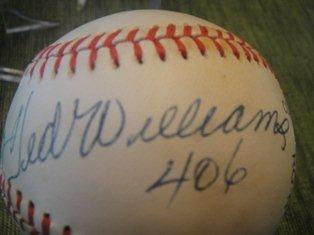 With records dropping left and right, and milestones reached every season there seems to be but one peak that still appears unreachable … the .400 batting average. Today’s Daily Bat Man Special is a very unique and special piece – a baseball featuring the autographs of the last two men to hit .400 in a season, Ted Williams and Bill Terry.  Terry hit .401 for the New York Giants in 1930, and retired after 14 season with a .341 lifetime average. He was elected to Baseball’s Hall of Fame in 1954. Williams, the last player to hit .400 in a single season did so in 1941 for the Boston Red Sox, and is still considered among the best, if not THE best hitter in baseball history. In addition to being a great hitter, Williams was a very disciplined hitter and refused to swing at bad pitches. He is the 2nd most walked batter in history, behind only Babe Ruth. This baseball features the authenticated autographs of both men, and includes the inscription “406,” added by Williams beneath his signature, which he rarely included while signing and makes this piece of baseball history all the more remarkable. This baseball and the signatures of both Bill Terry and Ted Williams are authenticated by PSA/DNA. Memorabilia and autograph collectors will certainly desire adding this rare piece of baseball history to their collection. The Daily Bat Man Special is an exclusive feature of BigTimeBats.com – if it’s authentic … it’s on BigTimeBats.com. Order this rare autographed baseball now before another motivated collector beats you to it!