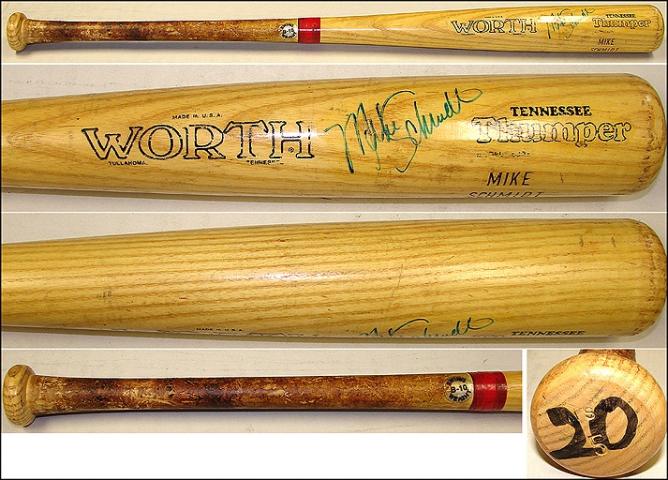 Any Phillies fan, 500 Home Run Club enthusiast or Hall of Fame game used memorabilia collector will tell you that today’s Bat Man Special is a true gem! Michael Jack Schmidt is easily the most famous all Philadelphia Phillies – boasting 548 career homes runs, 3 NL MVP awards, and World Series MVP of the 1980 series. Today we are pleased to offer this authentic blonde Worth Tennessee Thumper” pro model bat originating circa 1984 – one of the seasons in which Mike led the NL in home runs and RBIs. This bat exhibits clear evidence of heavy game use: light handle crack numerous ball marks and stitch impressions cleat marks across the back of the bat barrel heavy coat of vintage pine tar on the handle Mike’s initials and the bat length are stamped into the knob and his famous jersey no. 20 is written on the knob in black marker. Perhaps the best feature of this very rare, game used specimen – Mike Schmidt’s autograph graces the barrel’s sweet spot in blue marker. What makes this bat appeal and interesting to bat collectors is the presence of the red tape ring on the upper handle; Schmidt had a contract with Adirondack (Big Sticks) and all bats made for Mike in that time period featured the familiar ring of red on the upper handle. It appears that Schmidt had applied the red tape in an effort to disguise this bat’s true manufacturing identity and mask it as his normal Adirondack pro ring big stick. Luckily for Schmidt, the advent of HD TV did not come about until much later after his career had ended or the jig would have been up. Overall, this is a high quality game representation of one of the Phillies more popular players, a Hall of Fame third baseman, and one of baseball’s best players in any era. Authenticity of this collector’s treasure by PSA/DNA. .00