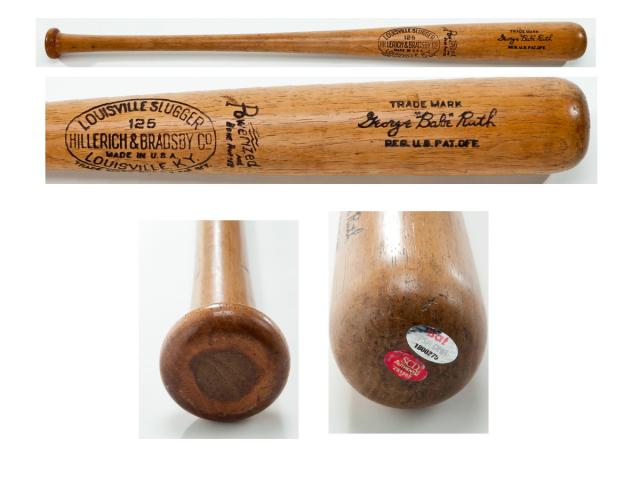 Hillerich & Bradsy pro model George “Babe” Ruth professional model bat is uncracked and shows evidence of moderate use. Ball marks are visible on the left and back barrel. Cleat marks are visible on the front barrel. The left barrel contact area is a common Ruth characteristic. It is well documented in numerous vintage photographs that Ruth was a label down hitter resulting in a left barrel contact area for a left handed hitter.  Babe Ruth’s first use of Hickory bats was during the 1925 season. Ruth’s choice of hickory centered on the hardness of the wood as compared to white ash. It is a common belief among ball players that the ball comes of the barrel of the harder wood with greater velocity. Ruth’s reference for ‘harder wood’ extends to orders of his ash bats. Many orders for ash bats appearing on his Professional Bat Ordering Record (PBOR), on file at Louisville Slugger Inc., are noted with ‘plenty of knots’. ‘Knots’ are much denser than the grained surface of Northern White Ash. During the 1932 season, Ruth’s PBOR lists 22 hickory bats as being ordered by Ruth. White Hickory bats comprise 19 of the 22 bats ordered. Two of these are noted as ‘World Series’ bats. Based on the barrel, handle and knob dimensions of this white hickory Babe Ruth professional model bat, we can identify the model as ‘His 2-3-32’, of which only three white hickory bats were made. We should also note that photos of Ruth during the 1932 World Series, including his famous ‘Called Shot’, depicts him using what appeared to be white hickory bats. The ‘Called Shot’ photograph shows Ruth in follow through with a very light colored bat displaying a very dark center brand. The sharp contrast within the photograph leads us to believe Ruth was using the light colored white hickory bat. Included with this Letter of Authenticity is a copy of an article, written by Babe Ruth and Hillerich & Bradsby, for inclusion in one of their Famous Sluggers publications. In it Ruth outlines his conversion to lighter and shorter bats. Ruth was quoted as saying “I then began experimenting with the length and found out what I should have known all along, that I could do better with a shorter bat. So I switched to 35 inches and sometimes slightly less”. The length and weight of this bat matches perfectly bats described in the article. After a thorough examination of this George “Babe” Ruth professional model bat and its player use characteristics, it was found to be of the opinion the bat is authentic, and was game used by Ruth during the referenced labeling period. The bat exhibits light to medium use and possesses identifiable player use characteristics. We have assigned the bat a grade of PSA/DNA GU 8  The model number, length, and weight specifications have been confirmed by the manufacturer’s ordering records as being ordered by the player during the referenced labeling period.  Manufacturer: Hillerich & Bradsby        Model Number: ‘His 2-3-32’            Labeling Period: 1932 Length: 34 7/8 inches         Weight: 35.6 ounces            Wood: White Hickory      Finish: Standard This is a very rare item. Interested parties must use the Contact Form provided on this page to express their desire in acquiring this fine piece of baseball history. A member of our team will respond to your inquiry promptly.