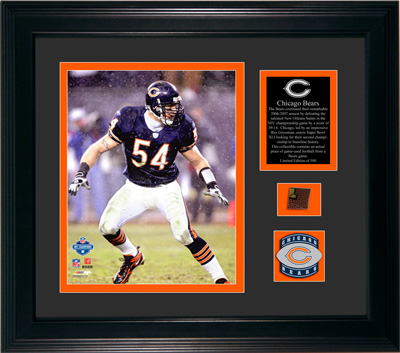 BEARS 2006 NFC CHAMPIONSHIP COMMEMORATIVE FRAMED PHOTO Celebrate the 2006 championship season of the Chicago Bears with this authentic sports memorabilia framed photo that commemorates the team’s return to the Super Bowl. This limited edition framed photo features a picture of All-Pro linebacker Brian Urlacher, an actual piece of game-used football from a Bears game, a Chicago Bears medallion and commemorative plaque. Order yours today! The Bears compiled a 13 win season en route to an NFC North Division title, thrilling first-round playoff overtime win versus the Seahawks and a dominating win over the Saints in the NFC Championship game – a win that puts the Bears into the team’s second Super Bowl in franchise history. In 2006 the Bears won games with dominating defense, exciting special teams play and opportunistic offense. This collectible piece is framed in a blackwood frame and measures 15″ x 17″. This is a limited edition piece; only 500 are available so order yours today! The plaque on this piece reads: The Bears continued their remarkable 2006 – 2007 season by defeating the talented New Orleans Saints in the NFC championship game by a score of 39-14. Chicago, led by an impressive Rex Grossman, enters Super Bowl XLI looking for their second championship in franchise history. This collectible contains an actual piece of game-used football from a Bears Game. Limited Edition of 500. LIMITED EDITION OF 500! Your credit card will be charged immediately upon placing your order so we can reserve your LIMITED EDITION collectible. This is an exclusive collectible that is NOT AVAILABLE IN STORES! Loyal and avid fans of the Chicago Bears will generate strong demand for this limited edition collectible so order yours today!