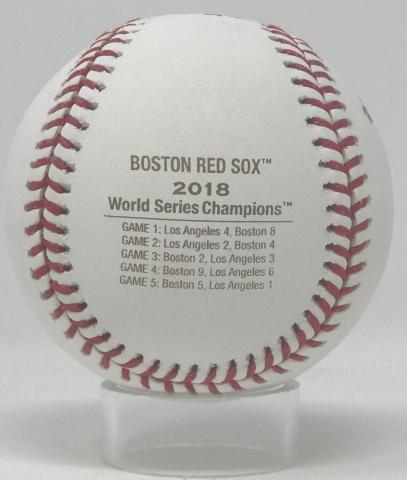 You will receive this set in two shipments: one shipment of just the case and another shipment with the baseball, football, and puck.   It has been a historic season for Boston sports.  It started with the Red Sox winning the 2018 World Series, followed by the Patriots winning Super Bowl LIII, and culminating with the Bruins claiming the 2019 Stanley Cup Finals.  With three major sports championships in the last seven months, Boston can be proclaimed as the City of Champions. This unique set honors all three championship teams with a unique collectible from each sport.  The football, puck, and baseball are all displayed in a special case that is etched with the Boston skyline.  This is an incredible collectible that honors the greatest era in Boston Sports History! To commemorate the Red Sox 2018 World Series Championship, the set includes an official Rawlings World Series Baseball.  This is the exact model of baseball that was used in the World Series with the addition of two commemorative quadrants.  Etched in Gold into the balls is the Red Sox logo and the scores of the five World Series Games. To honor the Bruins’ Stanley Cup championship, the set includes an official NHL puck.  The hockey puck is made from the same material as all game model pucks and features a special image on the puck face featuring the Bruins logo and the Stanley Cup Finals logo.   For the Patriots’ record setting sixth Super Bowl Championship, the set includes an official Wilson “Duke” Super Bowl football. This is the same model of football that was used in the Super Bowl with the addition of a commemorative third panel that is engraved with the date of the game, score of the game, and the Patriots logo.  The football is of a limited edition of 1,000 and comes with a certificate of authenticity.   Due to the limited nature of this offer we must charge your credit card for the full price immediately upon taking your order. This policy ensures we reserve a set for you. We will confirm your order by email. The items are not game used. Please allow 4 to 6 weeks for delivery.