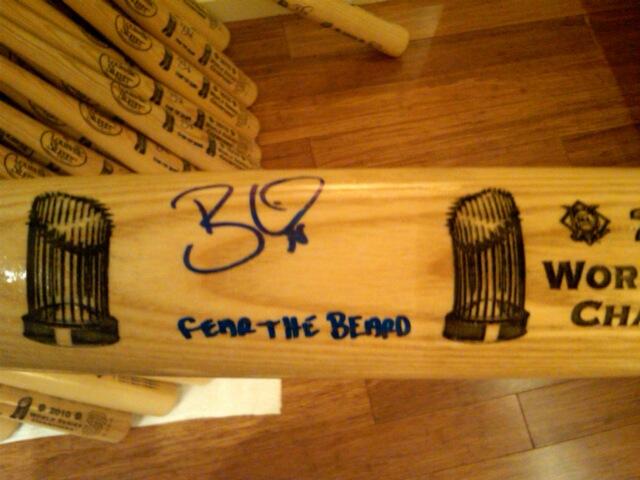 Giants closer Brian Wilson played a huge role in helping his team navigate the NL West and capture the National League Championship en route to the team’s first World Series title since moving to the West Coast. Today we are pleased to offer a VERY RARE Brian Wilson Autographed Giants 2010 World Series Champions Louisville Slugger Bat featuring the inscription, “Fear the Beard” along with Wilson’s autograph. These authenticated, autographed bats will attract Giants fans from around the country so we encourage you to order yours today. ONLY 100 are available. When the San Francisco Giants needed to close out a game they called on “the Beard.” Giants closer Brian Wilson – known throughout baseball for his dark black, bushy beard – became known as a guy who would come in and close the door on opposing hitters to preserve a win for the Giants. Opponents did not like to see him enter the game and, thus, teams began to “Fear the Beard.” Order this VERY LIMITED EDITION autographed Louisville Slugger today before they are gone. Due to the very limited edition offering of this autographed collectible we must charge your credit card for the full amount of the purchase immediately upon receiving your order. This will ensure we reserve your bat. We will confirm you order by Email. This bat is not game used. MADE IN AMERICA.