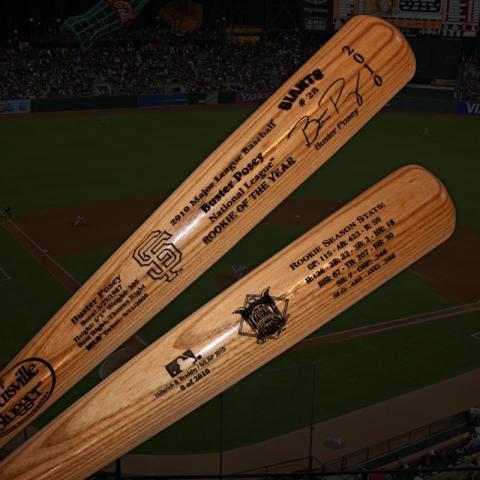 In addition to World Series Champion, San Francisco Giants catcher Buster Posey now claims the title of National League Rookie of the Year. To honor Posey’s great season this Authentic Buster Posey 2010 National League Rookie of the Year Louisville Slugger with facsimile signature is now available as a Limited Edition. This authentic Louisville Slugger special edition collectible is a full-size bat, 35 in. in length and weighing 32 oz. Giants fans are expected to generate swift demand for this beautiful specimen honoring their catcher. Posey, who played only two-thirds of the 2010 season in the Majors, easily topped the next closest vote getter in balloting for this year’s NL ROY Award and gained 20 First Place votes. Posey hit .305 with 18 home runs and 67 RBIs. He is the Giants’ sixth member to be named Rookie of the Year, and the first in 35 years. This authentic Louisville Slugger is a fitting tribute. Order yours now before they are sold out. Due to the limited availability of this special collectible we will charge your credit card for the full amount of this purchase to ensure we reserve your Louisville Slugger. We will confirm your order by Email. This bat is not game used.