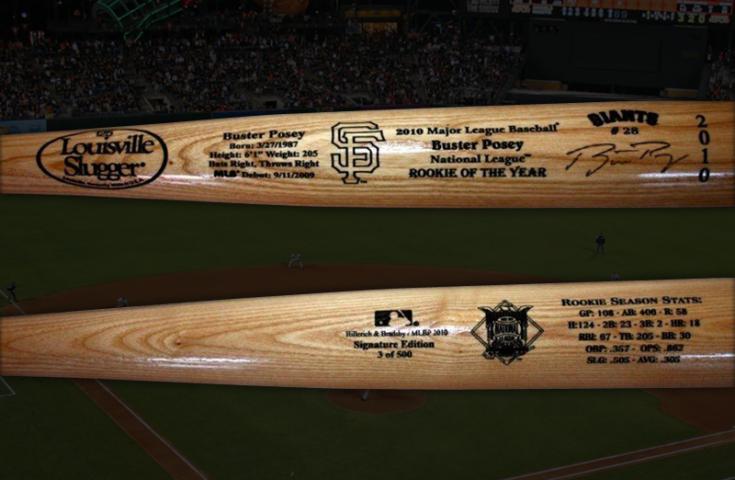 This a 2010 Rookie of the Year Louisville Slugger commemorative bat created to honor Giants’ catcher Buster Posey. Making this piece of baseball memorabilia more special is the fact the Posey personally autographed this model. This is a limited edition offering featuring the actual signature of the 2010 Rookie of the Year, so we do not expect this supply to last very long. Giants fans are generating fast demand for all team memorabilia in celebration of the 2012 World Series Championship – Order Your Autographed Bat now. Considered the top catcher prospect in the 2008 draft, Buster Posey did not take long to prove scouts correct in being named the 2010 National League Rookie of the Year. The Giants’ rookie also played a huge role in helping the team capture the 2010 World Series. This special commemorative bat autographed by Posey was manufactured and laser engraved like all the bats created by Louisville Slugger, and shares specifications in weight and length like official models used by players during actual games. We have re-opened supply of these bats in tribute to the 2012 World Series Champions and their fans. Due to the limited number of autographed bats available we must charge your credit card for the full amount of your purchase to ensure we reserve your authentic collectible bat from the supply on hand. We will confirm your order by Email. Please allow 4 to 6 weeks for delivery. This bat is not game used.