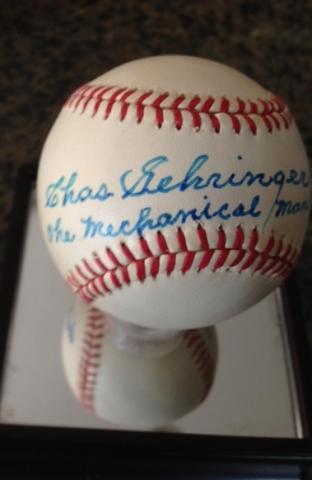 Born in Michigan and playing his career in Detroit (Detroit Tigers: 1924-42), Charlie Gehringer was one of the best-fielding second basemen in history. He led American League second basemen in fielding percentage and assists seven times. His 7,068 assists is the second highest total in major league history for a second baseman. Other career stats include: 6× All-Star (1933?1938), World Series champion (1935), AL MVP (1937), and AL batting champion (1937). In 1949, Gehringer was inducted into the National Baseball Hall of Fame. He also collected 5,369 putouts as a second basemen (the 6th highest total for a second baseman) and 1,444 double plays (the 7th highest total for a second baseman). Below Gehringer’s signature on this ball is the very rare inscription “The Mechanical Man”. Known for his consistency as a hitter and fielder, Gehringer was given the nickname “The Mechanical Man” by Yankee pitcher Lefty Gomez. Teammate Doc Cramer once said: “You wind him up Opening Day and forget him.” This JSA Authenticated piece of baseball history would make a fine addition to any memorabilia collection. Baseball is accompanied by a JSA certification. Due to the rare nature of this ball we must charge your credit card for the full amount immediately upon taking your order. This policy ensures we reserve the ball for you. We will confirm your order by Email. This ball is not game used. Please allow at least 2 weeks for delivery.