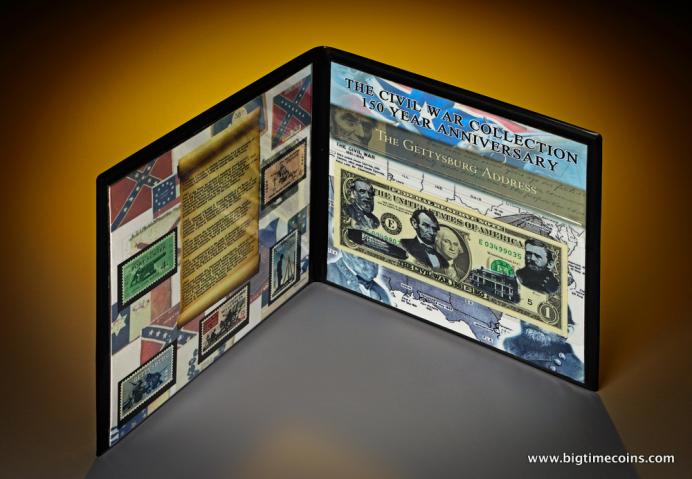 This handsome leather display folder features five (5) Commemorative Civil War Stamps with a detailed narrative that outlines their issue, as well as a Civil War Commemorative Federal Reserve Note $1 bill – the Richmond District notes are uncirculated and have never entered the banking system, making them a rare find.. A collection of such a rare commemorative pieces is not easy to find. Order it now. This seat features one (1) Richmond District $1 Bill in brilliant, ucirculated condition colorized with Images and events from the Civil War and 5 Commemorative stamps, one (1) each from 1961 – 65, all in a handsome, hard-bound black folder. Each set comes complete with a full Certificate of Authenticity. Each stamp is over 50 years old, and commemorates a specific era or event that occurred during the American Civil War. The 1961 Stamp represents the 1861 Attack of Fort Sumpter and the start of the Civil War. The 1962 Stamp representing the 1862 battle of Shiloh, one of the hardest fought battles in Tennessee by Grant. The 1963 Gettysburg stamp representing the 1863 battle of Gettysburg, and one of the worst causalities of the Civil War and most famous a battles.  The 1964 Wilderness stamp for the 1864 Wilderness battle. The Battle of the Wilderness, fought May 5–7, 1864, was the first battle of Lt. Gen. Ulysses S. Grant’s 1864 Virginia Overland Campaign against Gen. Robert E. Lee and the Confederate Army of Northern Virginia. The 1965 Appomattox Stamp, signifying the 1865 end of the Civil war at the Appomattox Court House in Virginia. The stamp is 50 years old. The Richmond Virginia District $1 Bill in uncirculated condition underwent a special process to place images on it, as if they are an actual part of the bill. The images featured include Lincoln the great President, General Lee the leader of the Confederate Army, General Grant the victor and future President, Fort Sumter where the first attack began that started the civil war and the McLean House where the generals met and agreed to peace with General Lee’s Surrender and the war ended. There are 12 Districts for the Dollar Bills, but you CANNOT just get these from Banks or by special order. They are tough to find and we spent many months searching. Due to the rare nature of this item we must charge your credit card for the full amount immediately upon receiving your order. This will ensure we reserve the item for you. We will confirm your order by Email. Please allow 2 to 3 weeks for delivery.