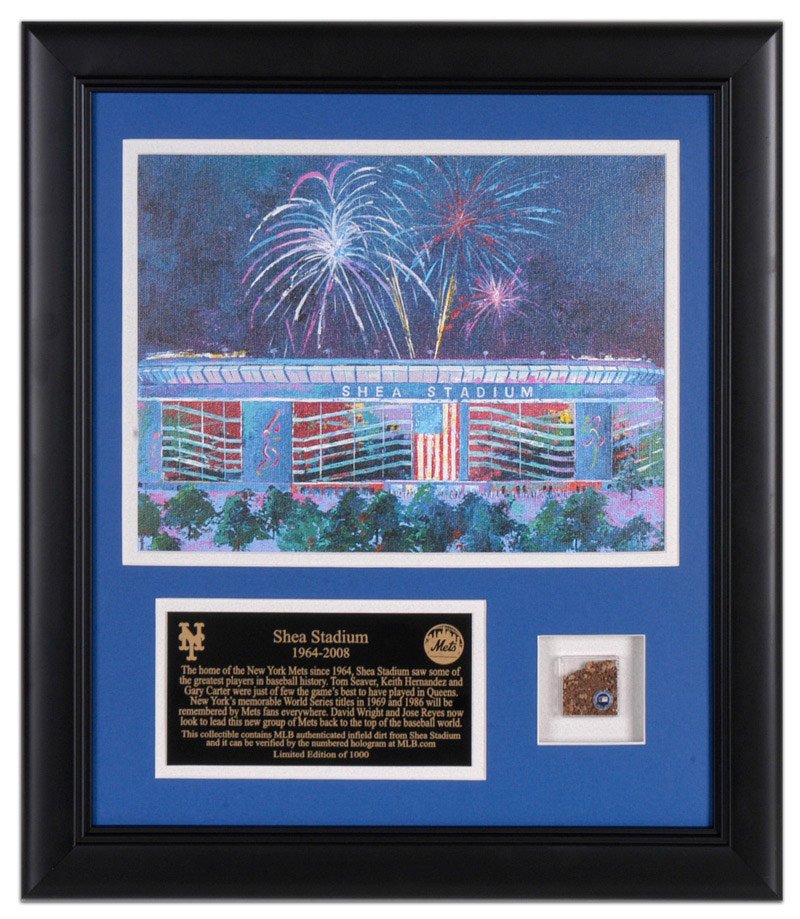 The closing of Shea Stadium after the 2008 season will mark the end of an era, one that saw the Amazing Mets of 1969 erase a huge lead to win the NL Pennant and capture the World Series and the historic 1986 World Series win over the Boston Red Sox. The Mets are playing their final season in Shea Stadium and we are proud to offer fans this beautiful and collectible Al Sorenson giclee (pronounced: zhee-clay) depicting the stadium’s exterior bathed in the glow of exploding fireworks. Only 1,000 of these high quality canvas reproductions are available. A second series will not be issued and loyal Mets fans are expected to generate strong demand for this unique piece of memorabilia. Order yours right now! Each commemorative Final Season collectible measures 15 x 17 and features a stunning, high-quality reproduction sprayed on canvass by famed sports artist Al Sorenson, authentic dirt from the Shea infield and the following engraved plaque: Shea Stadium (1964 – 2008) The home of the New York Mets since 1964, Shea Stadium saw some of the greatest players in baseball history. Tom Seaver, Keith Hernandez and Gary Carter were just a few of the game’s best og have played in Queens. New York’s memorable World Series titles in 1969 and 1986 will be remembered by Mets fans everywhere. David Wright and Jose Reyes now look to lead this new group of Mets back to the top of the baseball world. This collectible contains MLB authenticated infield dirt from Shea Stadium and it can be verified by the numbered hologram at MLB.com. Limited Edition of 1,000 This unique piece of Shea Stadium memorabilia is available now. Due to the limited edition nature of this product your credit card will be charged immediately upon receiving your order so that we can reserve your piece of Shea Stadium history. This collectible is perfect for every Mets fan, and baseball memorabilia collectors will want to make this Canvas Giclee part of their own collection. Order your copy now. Only 1,000 pieces are available. About the Artist In the past few years Al Sorenson has launched himself into the upper echelon of sports art. With minimal formal training, he relies on his raw ability to bring his subjects to life. The use of color and how it can create a feeling of excitement and provoke one’s imagination have amazed Al since his childhood. He uses brilliant and explosive colors to capture the mood and draw on a viewer’s emotions to make a strong connection between the art and those viewing it. Whether painting a vintage stadium or one of the game’s greats, Al interjects the excitement he experiences into every masterpiece he creates. From the finest detail to the large strokes of color, some of professional sport’s greatest images have been captured forever on canvas. Mr. Sorenson appeared inside the Baseball Hall of Fame this summer in conjunction with the Cubs v. Padres Hall of Fame game. His paintings are scheduled to appear at the Sports Museum of America in New York, and he’s currently working on a production of Wrigley Field for a US postage stamp.