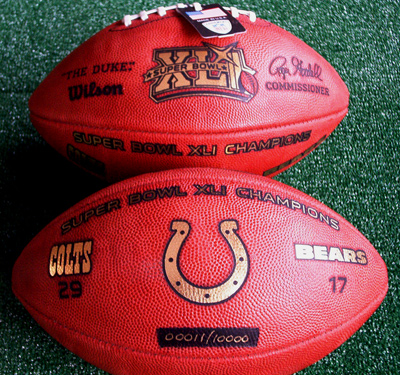 LIMITED EDITION COMMEMORATIVE COLTS SUPER BOWL XLI CHAMPIONSHIP FOOTBALL Celebrate the Super Bowl XLI victory by the INDIANAPOLIS COLTS with this just released LIMITED EDITION SUPER BOWL XLI GAME BALL from Wilson. Proudly display this rare piece of authentic sports memorabilia in your home to honor the SUPER BOWL XLI CHAMPION INDIANAPOLIS COLTS. Order yours now! This is the same ball used in Super Bowl XLI, except a third commemorative panel has been added to honor the SUPER BOWL XLI CHAMPION INDIANAPOLIS COLTS. The team logo, the words “SUPER BOWL XLI CHAMPIONS” and the score of the game is embossed in gold on the ball. The football is made in American and is limited to 10,000 hand numbered footballs. Avid and loyal COLTS fans celebrating their team’s first Super Bowl victory in over 30 years will generate high demand for this commemorative football. THIS BALL IS NOT SOLD IN STORES, SO ORDER YOURS NOW! This is the official football of the NFL from Wilson, official supplier of footballs for the NFL since the 1940’s. Your football comes with the Wilson “Made in America” tag and in a Wilson factory box. This is the highest quality football that you can purchase. This ball is not available in stores. Place your order now! Do not accept substitutes get the real game ball. The value is in the game. *These footballs are not game used. Limited edition of 10,000. Your credit card will be charged immediately upon placing your order so we can reserve your LIMITED EDITION collectible. Order yours now!