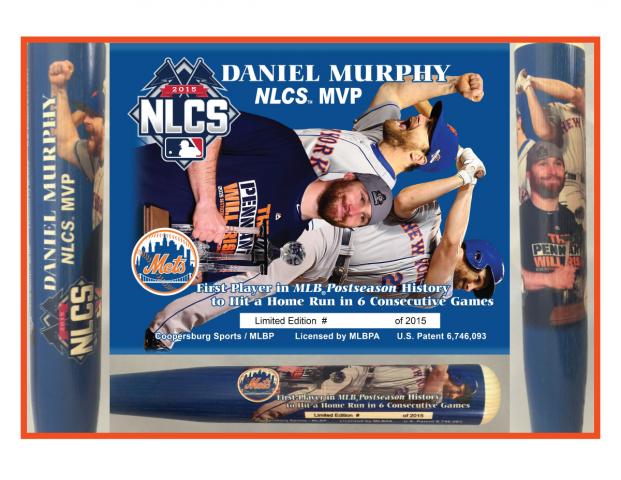 After completing the 4-game sweep of the Cubs in the NLCS, the Mets’ infielder Daniel Murphy was named series MVP for his performance during the series, which included hitting a home run in each of the four games and stretched his streak to a record-setting six consecutive post season games with a home run. This full size Photo Bat from Coopersburg Sports is a tribute to Daniel Murphy’s MVP performance and makes a great addition for Mets fans collecting memorabilia celebrating the team’s 2015 run to the World Series. Murphy hit .529 with four home runs (one in each game), 6 RBI and 6 runs scored. This is the Mets first World Series appearance since 2000. This bat is fully licensed by the MLBPA. Due to the limited release of this bat we must charge your credit card for the full price immediately upon taking your order. This policy ensures we reserve a bat for you. We will confirm your order by Email. This bat is not game used. Please allow 4 to 6 weeks for delivery.