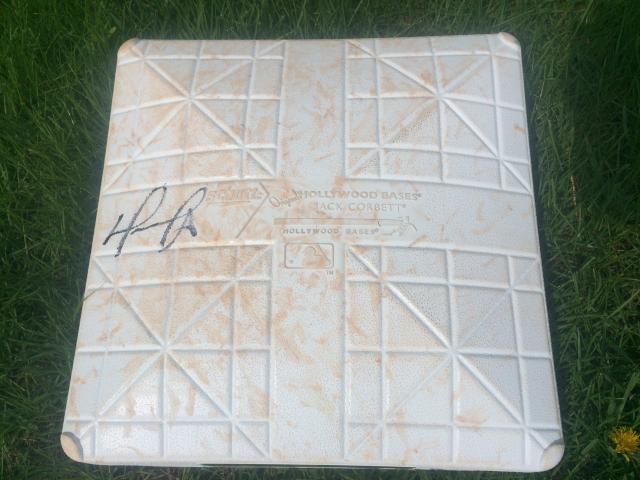 In 2016 David Ortiz said good-bye to baseball and to the fans around the country during his season-long farewell tour. It was a fitting conclusion to an amazing career. During a June series between the Red Sox and Twins games were played using the MLB Authenticated “jewel” – indicating full league authentication – in commemoration of Big Papi’s final appearance in the Twin Cities. This special mark was permitted for use by only the Red Sox and the Twins (Ortiz’s first team) during the 2016 Season. Big Papi, being a fan favorite all over the league, received warm welcomes during his Final Farewell Season everywhere he played.  At Target Field in Minnesota, the bases used for his final visit were jeweled on all 4 sides with David’s official Final Season logo.  Target Field and Fenway Park were the ONLY two ballparks in all of MLB to have this special Final Season Logo appear on the game used bases in recognition of David’s two MLB teams.  This is the same logo used by Big Time Bats for their exclusive limited edition autographed bats and baseballs. Because of our relationships across Major League Baseball, these bases were acquired directly from the Minnesota Twins by Big Time Bats.The bases show great use with diamond dust across their surfaces. We have five (5) bases available, two (2) from June 11, 2016, and three (3) from June 12, 2016, that you can add to your collection. However, due to the rare and limited nature of this offer we must charge your credit card for the full amount immediately  upon taking your order. This policy ensures we reserve a signed base for you. We will confirm your order by Email. This item is in stock and ready to ship.