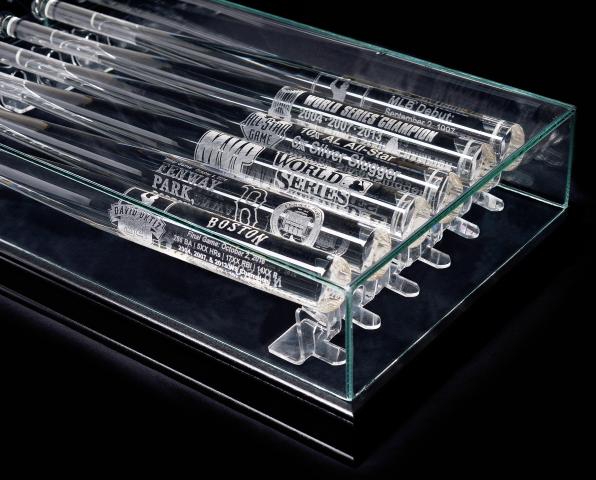 Big Time Bats is proud to release this exclusive 18” Mini Translucent Bat Set in honor of the distinguished career of David Ortiz. This Six Half Scale Bat Set highlights the many prominent milestones achieved by “Big Papi,” including his major league debut, awards won, honors, World Series Championships, World Series MVP, his final game, and his career batting stats. This 6 Bat Set includes a specially designed display case that is the perfect complement to this unique collectible set created in honor of this great player. Ortiz is a Major League Baseball legend, having played a key role in reversing “the curse” in Boston helping the Red Sox in a World Series in 2003, and two additional titles with the team.  His playoff heroics are well documented, being named the World Series MVP in 2013. Ortiz is also a 10x All-Star, 6x Silver Slugger, and will end his career as the best DH in history. This very limited mini bat sets that honor a Red Sox legend are sure to sell fast. Get yours before they sell out! Due to the limited nature of this offer we must charge your credit card for the full amount immediately upon taking your  order. This policy ensures we reserve a set for you. We will confirm your order by Email. These acrylic translucent bats may shatter like glass if dropped. Please note that the career stats bat cannot be manufactured until after the final regular season game of the 2016 MLB season. Additionally, a Red Sox playoff run will delay manufacturing of a career highlights bat. Please allow for 6 week delivery following Ortiz’s final game played.