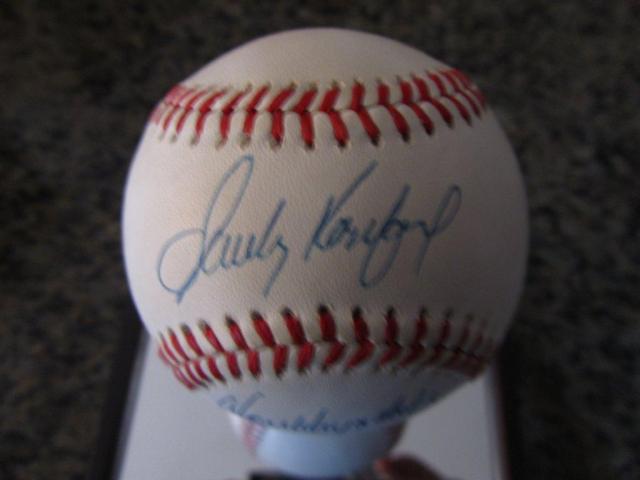 This is a hard to find Don Drysdale and Sandy Koufax signed baseball. In addition to being one of the finest pitching duos in baseball history, the two men were loyal teammates. As teammates on the LA Dodgers, the two men held out following the Dodgers’ 1965 World Series Championship. They were considered two of the best pitchers in the game at the time, and the Dodgers ownership offered them what was considered  by most to be a very ridiculous sum of money to re-sign with the team for the next season. The two men made a pact not to sign until the other was given what he wanted.  Koufax was given what he wanted but Drysdale did not get what he was asking and, true to his word, Koufax held out until Drysdale received the contract he wanted. Many credit this with the inspiration that started the MLBPA. This baseball comes with a Full Letter or Authenticity from James Spence Authentication. Due to its rare nature we must charge your credit card for the full price as soon as we receive your order. This policy ensures we reserve the ball for you. We will confirm your order by Email. This ball is not game used. This autographed baseball is in stock and ready for shipping.