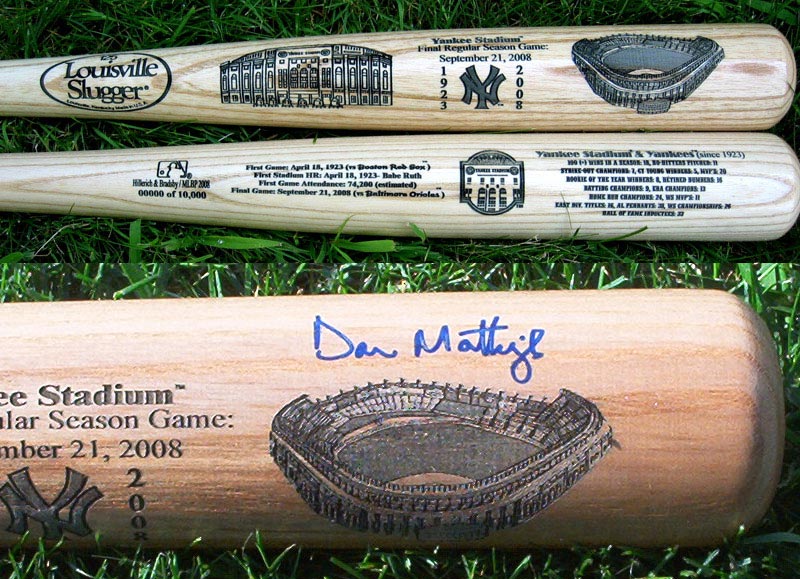 On September 21, 2008, the New York Yankees will play their final home game in historic Yankee Stadium, and fans will say good-bye to the “house that Ruth built.” To commemorate the closing of this fixture of the game Louisville Slugger created this authentic LIMITED EDITION Final Game collectible bat. As a very special feature, Don Mattingly will personally sign a number of these bats. His signature will appear above the stadium and it will be done in blue permanent marker. Each autographed bat will come with a letter of authenticity from Iron Clad Authentics. This autographed bat offer is part of the 10,000 edition size Final Game bat offer, but the signature bat will indicate signature and edition by the serial number. We don’t know how many bats we will sell, but we will offer it only though the last game of the World Series, and then these bats will no longer be available.Order your now before they’re gone. This bat created to honor the closing of Yankee Stadium features the date of the first game at Yankee Stadium on April 18, 1923, the first home run hit in the stadium on April 18, 1923, by Babe Ruth and other key dates. It includes images of Yankee stadium as it looked in 1923 and as it looks now. Yankees fans will generate strong demand for this LIMITED EDITION autographed collectible. ORDER YOURS TODAY! This authentic Don Mattingly autographed Louisville Slugger bat commemorating the the final game played in Yankee Stadium is available now. THIS IS A PRE ORDER ITEM. AS A MEMBER OF THE LA DODGER COACHING STAFF MR. MATTINGLY WILL NOT BE AVAILABLE TO SIGN BATS UNTIL THE POST-SEASON IS CONCLUDED. Due to the limited edition nature of this product your credit card will be charged immediately upon receiving your order so that we can reserve your piece of Major League Baseball history. This bat is not game used. This commemorative Louisville Slugger is the perfect collectible for every Yankees fan. This edition featuring the actual autograph of Yankee slugger Don Mattingly will not last long. Order your bat now.