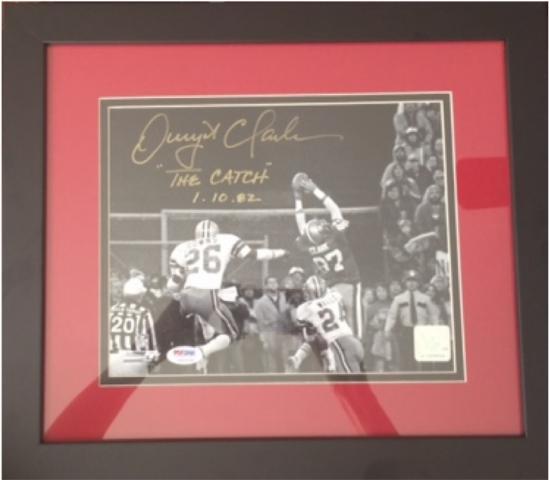 ?The Catch? is perhaps one of the most famous and most memorable plays in NFL history, ranking right up there with “the Immaculate Reception,” “the Music City Miracle” and others. “The Catch” refers to the winning touchdown reception by Dwight Clark off a Joe Montana pass in the January 10, 1982, NFC Championship Game between the Dallas Cowboys and San Francisco 49ers This framed 8? x 10? photo of ?The Catch? is signed by Dwight Clark and inscribed with ?The Catch 1.10.82?.  The signed photo is authenticated by PSA/DNA. On January 10, 1982, against the Dallas Cowboys, the 49ers trailed 27?21 in the final minute of play. Clark leaped and caught a 16-yard pass from quarterback Joe Montana in the back of the end zone to give the 49ers a 28?27 victory and advance to Super Bowl XVI.  That play, one of the most famous in the history in the NFL, has been immortalized as ?The Catch?. Clark finished the game with eight receptions for 120 yards and two touchdowns. During the 1981 season, Walsh had Montana and Clark routinely practice the 20-yard end-zone throw after regular practice. The game represented the end of Dallas’ domination in the NFC since the conference’s inception in 1970, and the beginning of San Francisco’s rise as both an NFC and Super Bowl power in the 1980s. The Catch was immortalized by three dramatic broadcast play-by-play calls. Vin Scully described the play on CBS Television:  ?Montana?looking, looking, throwing in the end zone?Clark caught it!?Get this wonderful piece of autographed 49ers memorabilia today! Due to the special nature of this offer we must charge your credit card for the full amount immediately upon taking your order. This policy ensures we reserve the signed photo for you. We will confirm your order by Email. Please allow at least 2 weeks for delivery.