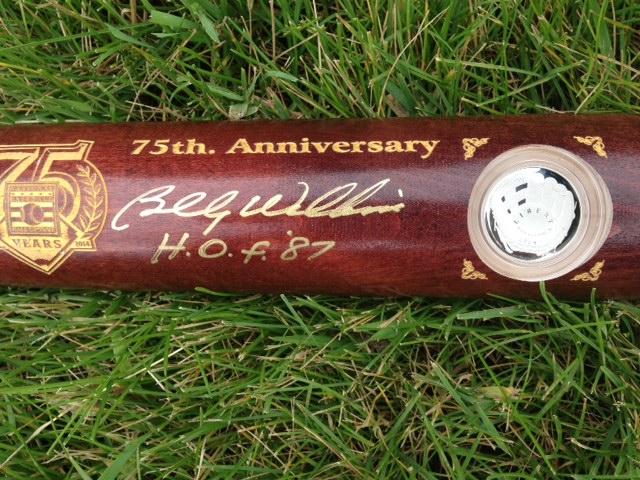 This is a BigTimeBats.com EXCLUSIVE 75th Anniversary Baseball Hall of Fame Billy Williams Signed Bat with Hall of Fame Commemorative Coin from the U.S. Mint. This is a full sized Louisville Slugger that has been specially produced to commemorate the 75th Year Anniversary of the Baseball Hall of Fame. BIG TIME BATS secured a very special signing with Billy Williams as the first individual to sign as part of the exclusive Big Time Bats 75TH Anniversary Hall of Fame celebration. These bats have been signed and inscribed (HOF 1987) by Billy Williams. The bat will also include an uncirculated National Baseball Hall of Fame Commemorative Coin from the U.S. Mint. This bat is exclusive to Big Time Bats and will be strictly limited to only 75 bats.  Each bat will be individually numbered and authenticated. Billy Williams was elected to the Baseball Hall of Fame in 1987.  On August 13, 1987, Williams’ uniform number 26 was retired at Wrigley Field. His was the second number to be retired by the Cubs, the first being Ernie Bank?s number 14. His achievements include NL Rookie of the Year in 1961, NL Batting Champion in 1972, and six-time All Star. Due to the limited edition nature of these bats we must charge your credit card for the full amount immediately upon taking your order. This policy ensures we reserve a bat from the series for you. We will confirm your order by Email. These bats are not game used. Please allow 4 to 6 weeks for delivery.