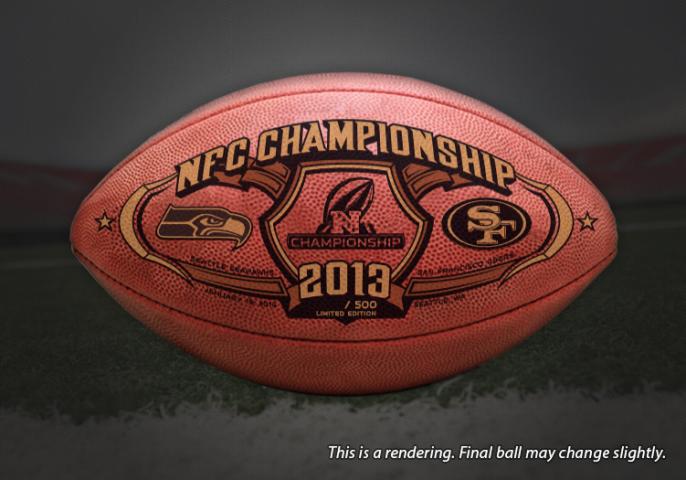 EXCLUSIVE RELEASE TO OUR CUSTOMERS! A fierce rivalry between Divisional foes will see its third contest of the season on Sunday when the Seahawks and 49ers compete for the right to represent the NFC in Super Bowl XLVIII. The teams split their 2013 regular season meetings with each winning at home, making Sunday’s game in Seattle a true test for the visiting 49ers. Few will argue there is a tougher place to play than in Seattle. To celebrate this historic clash of bitter rivals Wilson has released this exclusive NFC Championship Game Ball featuring the etched and embossed logos of both teams, NFC logo and date of the game. This ball is just like all the game balls used during the NFL Season, but with the addition of the commemorative panel. This ball is being made available as part of a very limited edition release and we expect fans of both teams to generate strong demand for this collectible – order yours now. Limit Two Balls per Order. Due to the rare nature of the Limited nature of this item we must charge your credit card for the full price immediately upon taking your order. This policy ensures we reserve a ball for you. We will confirm your order by Email. This ball is not game used. Please allow 4 to 6 weeks for delivery. Check out with PayPal and get more time to pay when you choose “Bill Me Later.”