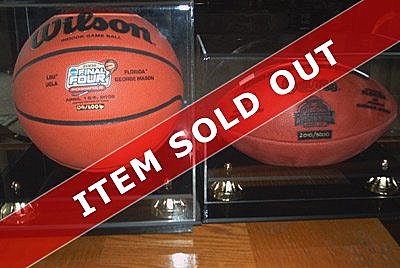 UNIVERSITY OF FLORIDA NATIONAL CHAMPIONSHIP FOOTBALL & BASKETBALL DELUXE SET Celebrate the dual Championships earned by the University of Florida Gators with this unique deluxe collector set! Receive a display quality commemorative football and basketball with an added panel to commemorate the school’s 2006-07 BCS Champion Football Team and the 2007 National Champion Basketball Team, respectively. Each ball comes with an acrylic case perfect for display in your home or office. Gators fans around the country will generate strong demand for his deluxe set. Order yours now! THE BCS CHAMPIONSHIP GAME BALL This is the same ball that was used during the BCS championship game, with the addition of a third commemorative panel honoring the champion Florida Gators and their victory over the Ohio State Buckeyes. This is a very unique piece of authentic sports memorabilia supplied by Wilson. THE NCAA BASKETBALL CHAMPIONSHIP GAME BALL This is the same basketball used during the 2007 Final Four and the Gators’ championship win over the Ohio State Buckeyes on Monday, April 2, 2007. A commemorative panel was added to this authentic Wilson-supplied game quality ball honoring Coach Billy Donovan and his championship team. THE MATCHING ACRYLIC CASES (2) Complete your spectacular display of commemorative championship game balls with two, top of the line acrylic sports memorabilia display cases. THIS PRODUCT IS MADE IN AMERICA, and is the highest quality case made. It provides an elegant display for your Florida Gators championship collection. Do not accept substitutes. This deluxe set of commemorative championship balls will not be available in stores so get your piece of history right here, right now! There is no shipping charge and you save $100.00.