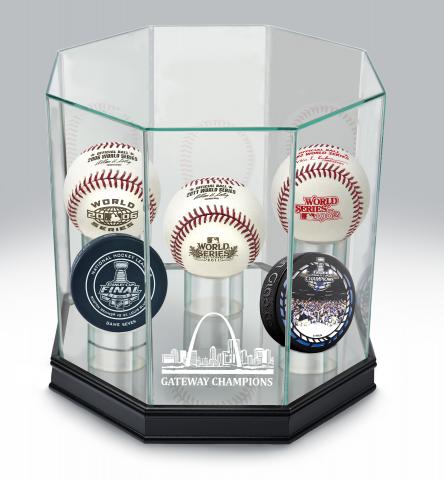 You will receive this set in two shipments: one shipment of just the case and another shipment with the baseballs and pucks.  The St. Louis Blues are the 2019 Stanley Cup Champions!  They’ve beaten the Bruins in a thrilling 7 game series, claiming their first ever Stanley Cup, and adding another championship banner to the Gateway City. This unique set honors the many St Louis championships with official World Series baseballs, NHL pucks, and a special etched glass display case.   This set will include official World Series baseballs from the 1982, 2006, and 2011 World Series.   The set will also include two commemorative pucks honoring the 2019 Stanley Cup Champion Blues.  The first puck is an official Stanley Cup Finals Game 7 puck.  This is the same make and model of puck that was used during the decisive Game 7 of the 2019 Stanley Cup Finals.  The second puck will have the team celebration photo after the Stanley Cup Finals.    This is an incredible set that honors St. Louis’ greatest champions!  The etched case is glass with a mahogany base and measures 13″w x 8″d x 8″tall. Due to the limited nature of this offer we must charge your credit card for the full price immediately upon taking your order. This policy ensures we reserve a set for you. We will confirm your order by email. The items are not game used. Please allow 4 to 6 weeks for delivery.